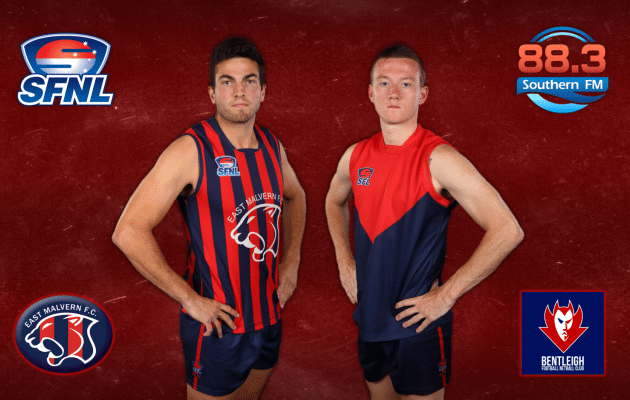 The penultimate round of the season sees several clubs still vying to qualify for finals, meaning several of these matches loom as must-wins.

This game is a massive opportunity for Bentleigh to put the rubber stamp on a finals berth. With a clash with the winless Clays to close out the home and away season, a victory over the Panthers here all but assures them fourth spot on the ladder.

Likewise, East Malvern will be desperate to claim the points over the Demons and avoid having to play a high-pressure elimination final against the Oaks in Round 18 in order to qualify.

The Panthers have had to do without several key players in recent weeks, but the potential loss of Nathan Henley, who has booted 46 goals for the season, robs the side of much needed class up forward.

Conversely, the return of the dynamic Matt Troutbeck is a massive boon for the Demons, who should have too much firepower and will likely book their ticket to September with a slender victory.

Another elimination final between two sides that, despite having only won seven games each, still remain unlikely finals contenders.

Cheltenham’s form in the last fortnight has been simply terrific, and proved its best is certainly good enough as it bested two sides that will finish in the top three come season’s end.

Though still a mathematical possibility for finals, plenty would have to go right for the eighth-placed Rosellas to make it given they are a game and percentage behind the other contenders. A win here over the Saints would make things interesting, but a loss would be curtains on their campaign.

St Kilda City also remains in the running, but with a final round date with the second-placed Mordialloc, a win here is absolutely paramount.

Plenty at stake for both clubs, but on form it’s hard to go past Cheltenham, especially at home.

It was a welcome return to form for Port last week, who finally tasted victory after seven consecutive defeats, and their triple-digit belting of Clayton will fill them with confidence heading into this week’s clash with St Pauls.

The Colts were unlikely victors over St Pauls when they last met at the Portress in Round 8, but the Dogs are a much more dangerous proposition at home, where they can better utilise their outside run and carry.

With St Pauls firmly in premiership contention, they would be keen to enter the finals series, and indeed next week’s clash with Dingley, with some momentum behind them, so a convincing win for the Dogs is likely.

Following a shock loss to Chelt last week, Mordialloc’s hopes for the minor premiership took a body blow as it slipped a game behind Dingley. Expect a fired-up Bloods side this week as they look to make amends.

Oakleigh were taught a lesson in their last encounter with Mordi, thrashed to the tune of 78 points on their home deck, but their form has significantly improved since then, largely through the return of midfield ace Jake Mullen.

The Oaks will no doubt be significantly more competitive that they were back in Round 8, but the Bloods will be too strong on their home deck.

Unfortunately, there will not be much to look forward to in this one as the ladder-leading Dingoes travel out to face the winless Clayton.

Dingley has been in irresistible form in the last two months, and should inflict another heavy defeat on the Clays.

Two rounds remain in the Division 2 season and three times fight it out for the final spot on the ladder, while Skye faces an intriguing clash against Keysborough.

Now while I firmly believe Skye will finish in the top five, it currently sits under pressure from the likes of Murrumbeena and Mount Waverley.

Thankfully for the Bombers, a strong percentage means all they need to do is win and they’ll likely lock up fourth spot on the ladder.

But they face a Keysborough side which is still very much in the hunt for a top two spot and will likely field a strong line-up.

This is a huge game for both clubs with one spot on the line and a chance for both to gain some ground on Mount Waverley, which has the bye.

The situation stands at this, a win for Murrumbeena and it will secure a spot in the finals for 2016 while a win for East Brighton keeps it in the hunt with one round to play.

For the Lions, they will be praying the Vampires can re-enact their round eight victory against the Beena at Hurlingham Park.

The last game of the home and away season for both clubs and they currently sit at opposite ends of the spectrum.

Having more or less secured top spot on the ladder, Chelsea Heights may take this opportunity to rest players, but with the likelihood of two straight weeks with no footy, they may use this chance to give their players one last run.

Not much to play here for here for the Tonners, other than a bit of pride in what has been a dreadful year.

Two sides that have shown various amounts of promise throughout the season meet in what should be an entertaining game of football.

The match marks Springvale’s last home game of the season so look for the Districts to end it on a high and put in a strong performance.

Hampton, like Springvale, is playing for nothing other than pride but a strong finish to the season would be its goal.

This game represents a chance for Caulfield to keep its hold on second spot with Keysborough going up against Skye.

For Highett, it’s another chance to move up the ladder and finish what has been a disappointing season on a strong note.

Doveton can still earn a double chance. It sits a win behind Endeavour Hills but leads the Falcons narrowly on percentage.

The Eagles will build their percentage against Sandown, whilst Endeavour Hills faces a tricky assignment, playing Ashwood away.

Endeavour Hills’ coach, Rob Dipper felt ahead of the season that people were underestimating the Falcons, and was happy for his side to fly under the radar.

With so much focus on premiership fancies Hallam and Ashwood, the Falcons have largely succeeded in staying out of the spotlight.

None the less, they have shown they are a force to be reckoned with, twice beating Hallam and also knocking over Doveton and Black Rock once.

The Falcons can lock in a double chance with victory over Ashwood.

Endeavour Hills is now well and truly on the radar and should record a narrow win over the Magpies.

South Yarra needs to beat Lyndhurst and hope for good luck to extend its season.

The Lions will account for Lightning, but require CPL to upset Black Rock.

It appears a forlorn hope.

The Lions will likely be left to reflect on what might have been, after spending much of the season in the top five.

A glance at the ladder puts into perspective the task facing Dandenong when it hosts Hallam.

The Hawks are guaranteed to finish top of the table, earning a double chance and a week off.

They have lost just two games all season. The Redlegs have been unable to win so much as one.

Hallam will end its home and away season with a big win.

When Carrum Patterson Lakes last played Black Rock it was unfortunate to encounter the Jets just after they began to hit top form.

Black Rock was always in control of that Round 7 encounter.

This time at home and needing to win to ensure a finals berth, the Jets will be on their game and appear certain to record a substantial victory.

Entering the final round of the season, Lyndale and Moorabbin occupy the same ladder positions in which they finished last year.

The Pumas are seventh, whilst this week’s host, the Kangaroos are ninth.

Moorabbin can take some encouragement from having won five games, already one better than last season.

The Pumas will continue their reputation for beating sides that are lower on the ladder.

Endeavour Hills will visit a confident Oakleigh District at Princes Highway Reserve, and Bentleigh will host a quiet Doveton.

St Pauls and Skye will be looking to bounce off poor results in Round 16 as they clash at McKinnon Reserve, and Parkmore / Springvale Districts will host Hampton.

Dingley will have their work cut out for them as they face a second placed Hallam at Souter Oval, after three consecutive losses in previous rounds.

In a game not to miss in Round 17, Cheltenham and St Kilda City will clash at Jack Barker Oval as they prepare for the fast approaching finals series.