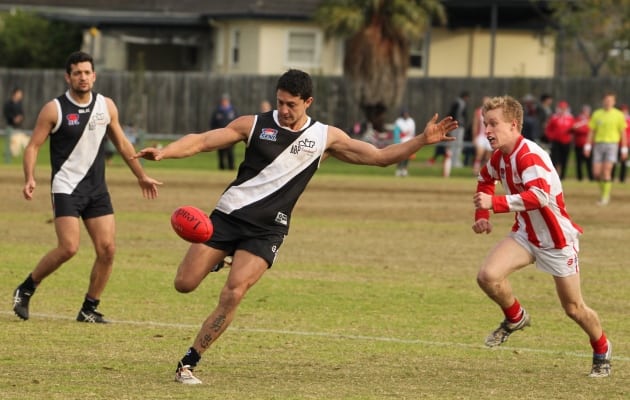 Read this week's issue of the SFNL Record here.

This is a massive game in the context of the top five.

Mordialloc enters the penultimate round having dropped winnable games against Clayton and Cheltenham in recent weeks, which has put its spot in the top three on shaky ground.

Currently fifth, Oakleigh District have now won four games on the trot, including three victories against top four opponents, to put itself in the box seat for a finals berth.

A win here will not only help shore up a top five spot for the Oaks, but, given Round 18 fixtures, also gives it the opportunity to potentially leap frog Mordi and earn the double chance.

The Bloods will not be push overs, especially on the vast expanses of Ben Kavanagh, however, the Oaks’ form against top teams is too good to ignore and they should prevail in thriller.

There is excitement aplenty down at Arthur Street after Bentleigh’s demolition of the Dingoes last week, and although the minor premiership may be just beyond their reach, they will no doubt pose a formidable threat come September.

The winless Vampires may offer little resistance as the Demons prime themselves for a tilt at the flag.

The Panthers’ season has hit the skids with their side crippled with injury, and after looking like flag fancies early in the season, are now in danger of missing the finals altogether.

Their opponent this week, Dingley, has lost the aura of invincibility that it has had all year after having its colours lowered twice in the last two weeks. Cracks have begun to appear, and this is a form slump the club will be desperate to arrest with finals imminent.

But the Dingoes remain on top for a reason, so expect Shane Morwood’s men to atone for their recent losses with an emphatic victory over East Malvern and secure the minor premiership.

There is nothing but pride on the line in this one as the Rosellas and the Saints look to next year.

City have been one of the year’s biggest disappointments, while Cheltenham have emerged as one of the form teams over the last 10 weeks, defying its somewhat lowly ladder position. It’s influx of quality kids in the senior team has given it plenty to look forward to next year, and will see it account for the Saints convincingly.

While East Malvern’s tie with Cheltenham was a body blow to St Pauls’ finals chances, Clayton remains firmly in contention.

The equation for the sixth-placed Clays is simple: a win keeps the dream alive; a loss and it’s good night Charlie.

The Dogs were lacklustre for the first two and half quarters last week, and similar complacency will see the superior Clayton side home comfortably.

Round 19 is a showcase of must win games for several sides with positions 3-5 on the ladder still up for grabs and four teams in the hunt.

While it is still possible for Skye to leapfrog Chelsea Heights into second spot before the home and away season finishes, gaining the additional 20% while relying on the Heighters to lose its final game of the season is a tough ask. But this isn’t a nothing game with the Bombers in a fight for third spot with Caulfield and Highett. While the Heighters are sitting reasonably comfortable in second, don’t be surprised if one or two players get rest this week.

This is easily the game of the round purely because of what’s at stake for both clubs. A win for Caulfield and it will go into the final round bye possibly sitting in third spot. A win for Highett and its finals chances greatly improve. Expect a fierce contest with neither side able to afford a loss at this stage of the season.

This is Black Rock’s final chance to sing the club song loud and proud after what has been a tough year in Division 2. With the bye in the final round, Saturday’s match against Heatherton falls as a must win, but also a winnable game. The Tonners also face the bye next week and will be keen to finish the season on a high note.

Last week’s loss to Skye may have dashed Hampton’s hopes of playing in the finals but the Hammers will still be keen to go out on a high when they take on the Burra. Keysborough has returned to some good form in recent weeks and may be on the way back up heading into season 2017.

If the Beena want to take part in this year’s finals series then they cannot afford to drop what should be a very winnable game against the Districts. A win will see Murrumbeena potentially leapfrog Highett and while a loss won’t necessarily spell season over (depending on the Highett result), it won’t do their chances any good. This match is a chance for Springvale to cause some havoc on the top five.

This is a must-win game for Ashwood. Currently perched on the third rung of the ladder, the Magpies can lock in a double chance in the finals.

If Lyndale wins it won’t be enough to put the Pumas into the five, but would be sure to result in Ashwood missing the double chance.

On a positive note for the Magpies, their main forward target Dale Carroll returned to action in Round 17 as did experienced player Chris Meyers.

The Magpies will win at home.

A win is all but certain for South Yarra against Carrum Patterson Lakes in this battle of the Lions.

It would make it seven wins in a row to the Yarras and could move them into a top three spot and a double chance if other results go their way.

They would need third-placed Ashwood to lose, but could pass Hallam on percentage, even if the Hawks win.

Hallam is currently fourth and faces a far tougher match than South Yarra this round.

This should be an enthralling clash. Endeavour Hills has a chance to rise from sixth to claim a finals spot, whilst Hallam must win to stay in the five.

It will be interesting to see how the Hawks adapt to what is sure to be a fierce contest after doing as they pleased against Sandown in Round 17.

Endeavour Hills inflicted Hallam’s first loss of the season in Round 7.

The Falcons may just get over the line again.

Mount Waverley will complete the home and away season unbeaten with a substantial win over Moorabbin.

The Mountain Lions’ James Gough should kick the three goals he needs to bring up his century this season.

With second place on the ladder a certainty, it will be a matter of finetuning for the finals for Doveton.

Lyndhurst can take satisfaction from its first season of senior competition, but it will experience little joy in this game.

There will be nothing but pride on the line when the division’s cellar dwellers meet.

A draw is a possibility, but it probably won’t be a pretty match.