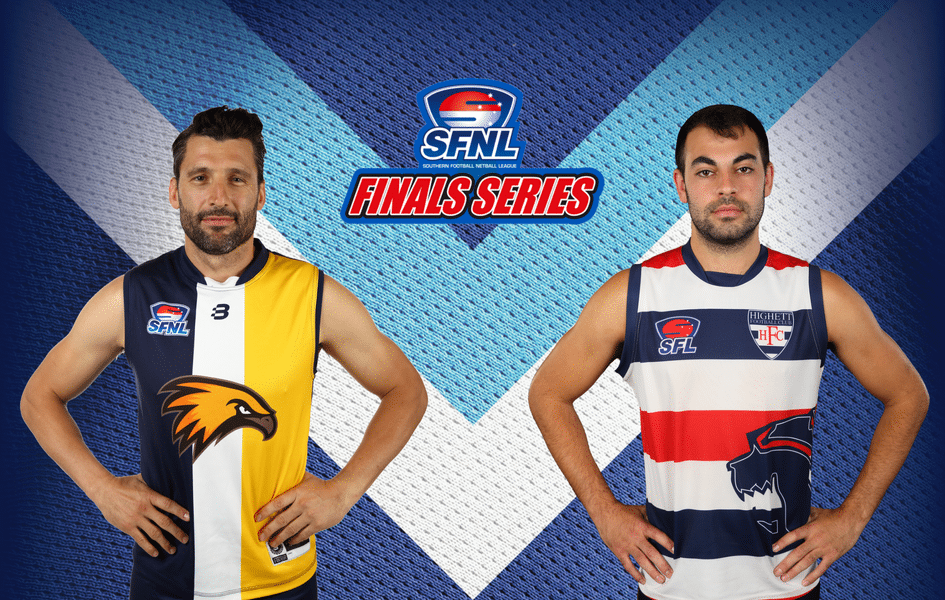 A spot in the grand final is on the line for Doveton Eagles and Highett in the second semi-final on Saturday, while Murrumbeena and Keysborough will be battling for survival.

A blockbuster in the true sense of the word, this game for a spot in the Grand Final will be as exciting and entertaining as it’s expected to be.

Doveton Eagles will aim to be one of the few teams to be promoted from Division 3 one year and make the Division 2 Grand Final the next, but it will have to overcome one of two teams to have defeated it this year.

The Round 15 clash between the two sides saw Highett come out on top by 10 points in what was a thrilling contest.

The Eagles were without leading goalkickers Peter Dye and Russell Robertson that day however, with the pair having combined for 90 goals this season, with a third threat in Darren Sheen (39 goals) among the scorers that day.

The trio form a powerful forward line combination for Doveton and will prove a handful for the unlucky Highett defenders that get the task.

The Eagles do possess firepower across the ground with high profile offseason recruit Nick Battle, who has kicked 26 goals this season, a star who has been their best player throughout the year.

Take nothing away from the likes of Cameron Carmody, Michael Callinan, Cory Wilson and Nick Beer who have all also enjoyed fine seasons.

With Doveton having a week off during the first round of the finals, these players will need to be up and firing straight away to defeat a hot Dogs outfit.

Highett is coming into the game with a not so surprising upset of Murrumbeena in the Elimination Final, where its own forward firepower was on display.

Mitch Hoar was the star with six goals and combined with Brett Collins to kick 10 goals for a Highett which kicked 19 majors without star recruit Ed Turner registering a major.

Turner will be needed this weekend however, and kicked four goals against the Eagles this year.

Gun midfielder Tom Brown was among the best on the weekend for Highett and was best afield in his side’s win against Doveton, leading a brigade of talented players.

With the likes Nathan Scott, Sam Jackson and Yianni Pasialis alongside him, the Dogs will look to again lean on the talented Brown to steer them to victory.

Another blockbuster in the true sense of the word, these two sides have met before in finals and will meet once again to see who will progress through.

Murrumbeena has taken the glory on each occasion the teams have met and will be in the box seat to do so again at Heatherton.

Disregard the previous meetings, as each side was in a different vein of form in each clash.

The Beena failed to capitalise on one of the most powerful finals performances from star forward Luke James on Saturday and would be remiss to do so again should he provide more fireworks.

They are still well led however, with offseason recruits Jay Bruno, Owen Lewis and Harley Ambrose all among the best on Saturday and strong performances from them again this weekend will go a long way to victory.

Last year’s stalwarts Alaster Bradley (51 goals) and Eduardo Espinosa (28 goals) were well held last week and Murrumbeena will be looking for them to get off the chain alongside Jake Semmel and Tommy Valenta.

For Keysborough, the forward line tandem of Matthew Carnelley and Chris Bryan was in sync on Saturday and it will be vital to two remain so against Murrumbeena.

After a quiet month, Carnelley broke off the chain and booted six against Caulfield and if he can break the reliance on Bryan to boot the majority of the goals, the Burra will greatly benefit.

James Anwyl showed why he was a prized offseason recruit with a strong showing in the elimination final, while Troy Cullen also showed his worth.

While the pair will need to be at their best, Keysborough will also lean on the likes of Geoff Humphreys, Riet Pal and Bryce Sutton to help get it across the line.

This will game will have as much intrigue and excitement as the first semi-final, but at the end of the day, one premiership contender will be playing their last game for the year.