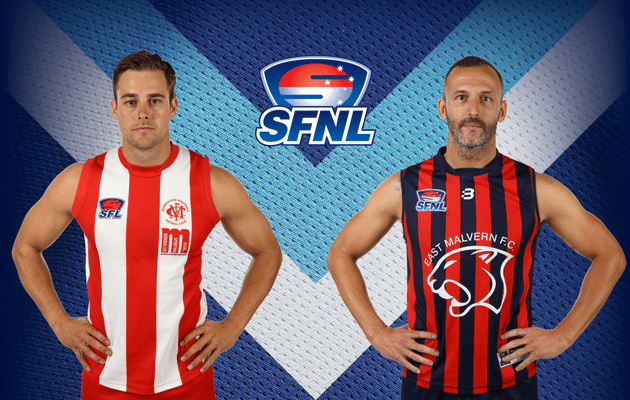 St Kilda City returned to the winners’ list in emphatic fashion last weekend, thrashing the Colts to get its quest for a finals berth back on track. Sitting fourth on the ladder with a healthy percentage, there are plenty of positive signs around the Peanut Farm at the minute.

The Heighters, meanwhile, are in freefall, having lost their last four matches by an average of more than 10 goals. And with key players sitting on the sidelines, its hard to see the slide being arrested anytime soon.

Expect City to win this comfortably.

East Malvern took the points in their last meeting at the Zoo, blowing the Bloods away with a terrific final term.

Mordialloc have not lost since, and enter this week’s clash with an eight-match winning streak behind them. They have lost several players through injury and unavailability along the way, however their depth players continue to step up and find form, which may leave coach Michael Brown with some selection dilemmas as the season progresses.

The Panthers’ side contains some of the most elite talent in the competition, but they too may have a few missing this week with Chris Carey, Luke Duffy and Lucas Hall all in the mix for selection in the Vic Metro team for this weekend’s clash against Vic Country.

Despite the list of potential omissions for both teams, this will still be a high-quality contest and a likely preview of this year’s premiership decider.

Almost impossible to pick a winner here, but home ground advantage may play into Mordi’s hands given its larger dimensions. Either way, there won’t be much in it come the final siren.

After five rounds, the Demons were sitting comfortably atop the ladder and looking every inch a contender, while the Rosellas were languishing in the lower reaches of the ladder after a string of disappointing performances.

Fast forward to Round 11, and the two enter this clash locked on five wins each and fighting to secure a spot in the top five.

Bentleigh have now lost three on the trot and would be desperate to turn their form around, while Cheltenham will be buoyed by a string of improved performances in recent weeks, making this contest a pivotal one in the context of the season.

The Demons’ defence has been the second stingiest in the League, conceding an average of just over 48 points per game, while the Rosellas have at various stages struggled to kick winning scores, particularly without Coburg-listed forward Josh Fox. As such, don’t expect a high scoring shootout.

With plenty on the line, this is another result that could genuinely go either way, but with Bentleigh celebrating champion Scott Lawry’s 250th match at Arthur Street, expect the hosts to rise to occasion.

When these two sides met back in Round 2, the Colts saluted by the barest of margins at Princes Highway Reserve.

It has turnout to be their only win for the season so far, with the side anchored to the bottom of the ladder, while the Oaks have emerged as a finals dark horse on the back of their impressive form of late.

The physicality of the Oakleigh District side has been a feature in recent weeks, and it could also ensure a spicy encounter against a Colts outfit that never shies away from a contest.

While Port are always a big chance on their home patch, the Oaks’ form has been too good to overlook.

As the losses continue to mount, the undermanned Dingoes are leaving themselves with plenty of work to do if they are to qualify for finals.

And with two of Dingley’s biggest stars in Lucas Walmsley and Danny Ades likely to don the Vic Metro jumper on the weekend, their task will get even more difficult when St Pauls visits the Den.

The Dogs are building nicely, and on the back of four consecutive wins have entrenched themselves in the top four, three games clear of the fourth-placed Saints.

As we saw last week, we can never write off the Dingoes, but knocking off St Pauls might be too big an ask.