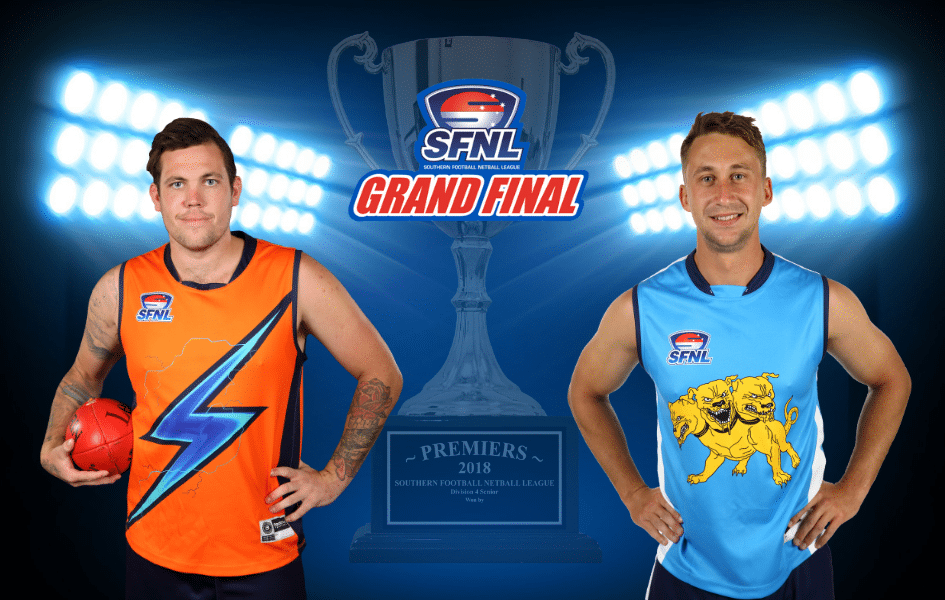 The Division 4 Grand Final is finally upon us and what a cracking matchup it promises to be!

Lyndhurst, fresh off their semi-final win a fortnight ago, enter their first senior Grand Final in only their third season in the SFNL. It is a tremendous effort from a young club and the prospect of already adding some silverware is phenomenal feat.

But they will square off against the in-form team in the competition, running into a rampant Cerberus side who disposed of both Frankston and CPL in the past fortnight with relative ease.

No matter what the level of football one thing is for sure, finals is a different ball game to that of the regular season.

Carrying strong form along with a clean bill of health into September is crucial for any side’s premiership prospects and Lyndhurst have certainly ticked both of those boxes.

Winning their past 11 games on the trot, the club could barely be in better shape in their tilt towards a breakthrough maiden senior premiership.

The team has been gaining more momentum each week and currently wouldn’t remember what losing feels like. They will be desperate to ensure that they don’t experience those emotions again in 2018.

Like their opponents, Cerberus will feature in a SFNL Senior Grand Final for the first time in their history. It is a remarkable return to senior football for the club and one that looked unlikely at the half way point of the season.

After Round 9, the club’s win-loss record sat at 4-5 with a mediocre percentage of 81.76. Since that point in time they haven’t lost a game and truth be told haven’t really looked like dropping one.

Their scoring has gone through the roof during their winning streak and they would back their offensive game to counter Lyndhurst’s defensive style.

In the first nine rounds of the season the club only averaged a paltry 53.77 points a game. But since then they have bolstered this to 100.1 points a game to make them deadly in attack.

Adding to the intrigue of this clash is the mystery forward from Cerberus who has taken the competition by storm in the past month.

Jimmy Miller is the name on everyone’s lips at the moment after the Dogs forward booted another bag of seven goals last weekend.

Miller did not pull on the boots until Round 15 this season but has certainly made up for lost time, slotting 25 goals in just six appearances.

As good as he’s been, it’s unlikely he’ll have it all his own way against the best defensive unit in the competition.

The Lightning have conceded on average only 41.21 points a game this season.

While their defenders have not seen Miller first hand this season, he will no doubt be high on their agenda as one to shut down.

Down the other end of the ground, Lyndhurst have their own trump card to play however, with big man Hamish Browning a key pillar in the Lightning’s attack.

The power forward has consistently booted goals and has topped the leading goal kicking tally for the majority of the season.

Browning averages around three majors a game and will be a huge key to the Lightning’s premiership chances.

When he struggles to hit the scoreboard so does the entire team, but the Lightning have never lost when he kicks 4+ majors. The club will hope that their barometer finds the big sticks plenty of times come Saturday.

In the engine room both sides have plenty of hard-nosed midfielders capable of winning contested footy, which will no doubt be a feature of this fierce contest.

The Lightning love closing down any empty space and would much prefer a low scoring arm-wrestle.

Their defence has been elite this season only letting through one triple figure score, but worryingly that came against Cerberus in the Round 14 loss.

Due to the quirks of the fixture, these two sides only got a look at each other twice this season with the ledger sitting square at 1-1 apiece.

Neither game was close however, with the home side dominating both proceedings. This time on neutral turf, you’d expect the gap in the margin to tighten up and for both teams to bring their best especially with what’s on the line.

One of these sides will be adding a senior premiership cup to their trophy cabinet for the first time come Saturday evening and there will no doubt be plenty of nerves in both camps.

But when picking a winner, right now it’s simply too hard to look past Cerberus’ recent body of work. They seem to be thriving on the pressure of finals and their confidence levels are at an all-time high.

Having said that Lyndhurst were clinical in the Semi Final win two weeks back and you’d back them in to make a real game of this.

It should be a competitive tussle that goes right down to the last quarter. Bring it on!