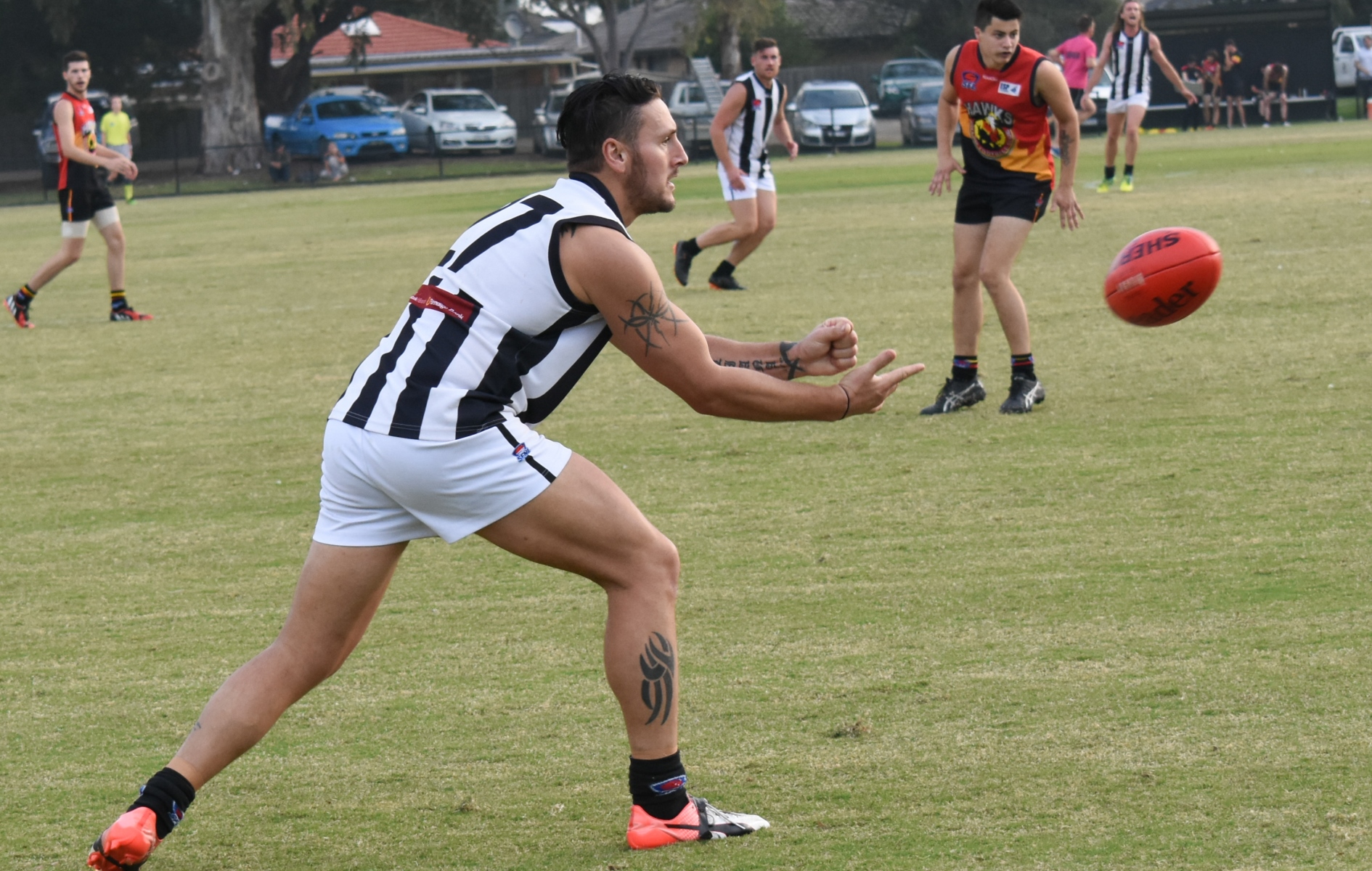 “This is our grand final. We do not stop no matter what,” stressed Hallam coach Ash Allen at the last change.

He was disappointed with his side’s third term, indicating Hawks players came out flat after half time.

Still, they were just five points behind Heatherton with a quarter to play and in with a shot of recording a long-awaited 2018 win.

The Hawks threatened to hit the lead early in the final stanza, but kicked a behind, and the Tunners punished them with a snapped goal at the other end.

Mitch Lambert hit back for Hallam with his accurate set shot at the seven-minute mark, cutting Heatherton’s lead back to five points.

However, the Tunners wasted little time replying with a successful shot on the run, and then followed up with a Mark Stevens’ mark and conversion.

That came at the 14-minute mark, by which stage Heatherton led by 17 points.

When hail and heavy rain hit three minutes later, any chance of Hallam overhauling the deficit literally slipped away.

The game was completed in near darkness, with this scribe battling to make out the footy without the aid of binoculars.

A late major enabled Hallam to cut the final margin to 11 points.

Heatherton coach Shayne Sheedy was happy to escape with the four points.

“It was an ugly contest. They came to play,” he told his team after the game.

Such was Hallam’s application early in the contest that the Hawks at one stage had booted four goals to one.

That prompted some shuffling by Sheedy, including moving Cameron Webb from the backline into attack.

Webb contributed an important major in the final term.

Stevens, who often plays in defence, was used up forward, finishing the day with four goals.

Unfortunately, he suffered a neck fracture in the final term, ending his season.

Another disappointment from a Heatherton point of view was its three green cards, with David White, Ben Clark-Henry and Travis Faull all falling foul of the umpires.

Reagan Maddaford was named the Tunners’ best for the third consecutive time whilst Rory McIvor was unsurprisingly best again for beaten Hallam.

Sandlant alternated in the ruck with Callum Cusack and enjoyed his first taste of senior footy.

He lightheartedly suggested in the presence of coach Sheedy that he is in with a chance of playing a full season in the firsts next year.

After a bright start in which it kicked the game’s first goal through Frank Martinicchio, Ashwood led by 10 points early in the match.

Heavily favoured Hampton Park was intent on playing dry-weather-footy despite the water-coated Sherrin.

Excessive handballing from the Redbacks and the Magpies’ tackling pressure helped make Ashwood the better side early.

However, the Magpies failed to capitalise on their good work around the ground.

They kicked 1.4 before Hampton Park scored.

Once the Redbacks got on the scoreboard they quickly took control.

That gave the Redbacks the lead, which they extended through a Travis Davis goal.

Hampton Park’s quarter time lead was just nine points, but the Redbacks had seized momentum, and built on that with a 6.2 to two-goals-straight second term.

Leading by 35 points at the long break, Hampton Park appeared set for a big win.

Surprisingly, both teams added three goals in the second half, and Ashwood restricted Hampton Park’s winning margin to 40 points.

Williamson was the Redbacks’ best and booted four majors, one more than teammate Mitch Robinson.

Ryan Forsyth performed strongly for the outplayed Magpies and Martinicchio was their only multiple goal scorer, finishing with two majors.

It was the end of a tough week for Ashwood. Popular forward Dale Carroll incurred a five-week suspension for an incident involving Black Rock’s Andrew Ferguson.

The Demons enjoyed just an eight-point advantage at quarter time, but then proceeded to add 3.4 to the Falcons’ no score, grabbing a five-goal lead by half time.

Endeavour Hills never recovered and was given a brutal reminder of how difficult it will be to repeat last year’s grand final appearance.

One positive for the Falcons was Daniel Morrison’s continuing form resurgence.

He backed up a strong showing in Round 15, this time being named Endeavour Hills’ best.

An assured Daniel Morris led the charge for the menacing Demons, whilst teammate Lachlan Morrey booted four goals for the day.

That proved one more than the Endeavour Hills’ side could muster, as the Falcons were condemned to a 62-point loss.

Luke Reggardo has been a steady presence for Black Rock this season, playing all 16 senior games.

He punished South Yarra with a best on ground performance, as the Jets soared to a seven-goal win.

Darcy O’Brien, another 2018 constant for Black Rock, was also excellent.

He booted three of the Jets’ goals, as did Andrew Sparks.

Other strong contributors for the winning team were ruckman and forward Sam Nickless and centre half back Cooper Ferries.

Eric Ghasperidis was best for the beaten Yarras and was one of his side’s five single goal scorers.