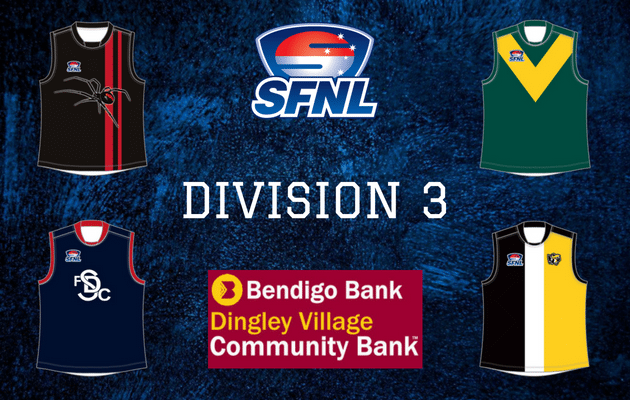 
Listen back to this week’s The 5th Quarter podcast, featuring SFNL CEO Mike Palmer as the special guest, in the player above.

The gap between teams in the top 4 and those in the lower half of the ladder was starkly illustrated in a lopsided round.

With a whopping 14 goal kickers, Springvale Districts put Heatherton to the sword, crushing the Tunners by 105 points.

Surprisingly, Stefan Feehan was the only Demon to register more than two majors, finishing with five.

Lance Baptist was a dominant presence for the winning side, being named the Demons’ best for the first time this season.

“Baptist started down back but then went through the midfield where he was able to win some important ball,” his coach Kris Thompson said.

The coach was also delighted with the work of another of his players who celebrated a milestone game in style.

“Brad Dight rucked basically all day and was super in his 100th game,” Thompson declared.

Thompson noted it was the first time in 11 years that the Demons have celebrated a win at Heatherton.

When these sides met earlier this season, Heatherton small forward Khaled Kandakji was the only player to kick more than one major for the Tunners, finishing with three.

Sadly, he was not on the field this time, having put in a transfer request to shift to the top of the ladder Doveton Eagles in Division 2.

It was a one-sided avian battle as the Magpies sent Hawk feathers flying at Hallam Reserve, recording a 107-point win.

After being competitive in the early minutes of the game, Hallam had no answers once Ashwood upped its level.

It was a day out for the Magpies’ trio of Carroll brothers.

Big Dale booted eight goals in a best on ground display, whilst versatile midfielder Paddy kicked four, being next in line on the best players list.

Ryan contributed all over the ground and was unlucky not to be named in the winner’s best.

Ashwood’s David Reilly was again superb, short-circuiting many of the Hawks’ attacking efforts, and teammate Brad Hemphill was another to impress.

He finished with four majors.

Shannon Henwood continued his impressive form since joining Hampton Park in late May.

He was best afield as the injury depleted, but still powerful Redbacks demolished South Yarra by 74 points.

Such absentees may have an impact against other sides destined for finals action, but are scarcely noticed against teams in the bottom half of the ladder.

The Yarras have plenty of injury concerns of their own and don’t have the depth to cover all their losses effectively.

That said, Paddy Johnson was their best player, an outstanding achievement in just his second senior appearance after stepping up from the Thirds.

He backed up a strong debut game the previous round.

Black Rock coach Lachie Batt again saw his side give a good account of itself in the clearances, but fail to challenge one of the top sides on the scoreboard.

Batt’s Endeavour Hills counterpart, Rob Dipper, acknowledged the Jets’ efforts in the ruck and ability to get first use of the footy in the middle.

The Falcons limited the Jets’ ability to impact on the scoreboard, then launched a third quarter assault that put the match beyond doubt.

They took a 56-point lead to the final break.

That proved to be Endeavour Hills’ winning margin after an even last quarter.

Nate Strom booted four goals and was best for the Falcons.

Daniel Batson was another solid contributor for the winner, as was Anthony Cvek who impressed from halfback.