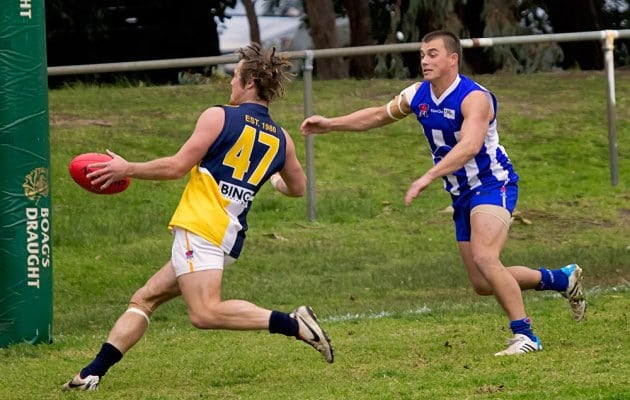 Moorabbin is one of a number of Division 3 senior clubs entering the 2016 season with a new coach in charge. David Velt takes on the responsibility at the Kangaroos.

He is well equipped for the job, with plenty of footy knowledge and a number of seasons of coaching experience behind him, including leading North Coffs Harbour Football Club to six consecutive grand finals. Half of these resulted in premierships.

Moorabbin had an impressive 2015 season and reached the Preliminary Final, having showed plenty of character to win a Semi Final after what could have been a confidence-sapping defeat in week one of the finals.

Matthew Johansson was a huge part of the Kangaroos’ success last season and was a telling presence, mostly in the forward line, but also saving the day with crucial defensive marks.

He has moved to Chelsea Heights Football Club in Division 2 and is sure to be missed at Widdop Crescent.

It will be interesting to see how well the Kangaroos are able to cover his absence.

One anomaly last season was that, despite a strong home record in which it lost just three games, Moorabbin only went down once in an away game during the regular season.

The club will share its ground with East Brighton during the 2016 season as the Vampires’ new pavilion development proceeds.

The Kangaroos’ season kicks off with a round 1 home game against Dandenong at Widdop Crescent on 9 April.

Doveton has returned to Division 3 after a couple of seasons in Division 2. The side finished one game short of safety in 2015 after losing a few close games during the season.

The most critical of these was a two-point defeat to Heatherton in Round 16 that saw the Tonners climb above the Eagles, a blow from which Doveton was unable to recover.

The Eagles have had different coaches in each of the last three seasons and the trend has continued with star Eagle Corrie Wilson now in charge.

Given Wilson has won four consecutive club Best & Fairest awards, some rival teams may have been happy to see him giving instructions from the boundary this season, but he will again pull on the boots.

Wilson won the Division 3 league B&F way back in 2004 and as well as his extensive playing experience, has also spent time as senior coach at Nyora in the Ellinbank & District Football League.

He proved at Nyora that coaching does not diminish his own playing standards, snaring a club Best & Fairest whilst taking charge of the team in 2010.

As far as his current team goes, Doveton is already considered a strong contender to swoop on the premiership cup with the SFNL radio team bestowing early favouritism on the side.

Wilson has the assistance of a couple of big-name players who are returning to Doveton. Peter Dye led the way in the Eagles’ 2013 season, topping the Division 3 goal kicking with 73 majors and helping to keep the side unbeaten that year.

He kicked six goals in the Grand Final as the Eagles, captained by Wilson, comfortably accounted for Carrum Patterson Lakes.

Dye followed up with a 63-goal season in Division 2, finishing second on the goal-kicking table, before a year in the SEFNL.

Expect him to be a potent force for the Eagles in 2016.

Matt O’Callaghan is another player returning to Doveton. He was a joint winner of the 2012 Flack Medal, playing for the Eagles.

He stayed with Doveton for the next couple of seasons, notching 18 Division 2 senior matches in 2014, before spending last year playing for Bayswater in the EFL.

As is the nature of footy, there is some disappointing news for the Eagles too. John Kennedy has headed to Queensland and is sure to be missed. He played 15 senior games for Doveton last season, contributing 23 goals and being named in the club's best players in a number of games.

Sean Paynter is another who has moved on after 16 senior matches in 2015. He was listed in the Eagles' best on several occasions.

On balance though, the Eagles will have a strong list and it is to be expected that they will play a major role in September.

Doveton's season starts with a home game at Power Reserve against Sandown on 9 April.

South Yarra enters the new season with Darren Stegehuis having taken on the senior coaching role.

Nicknamed Daisy, the new coach brings plenty of footy knowledge having played more than 150 games for Silvan where he has also had a number of seasons coaching experience.

He watched a few of South Yarra’s games last season as his son Scott is a senior player for the club.

The club expects there will be some structural and cultural changes under Stegehuis.

As far as changes to the playing list are concerned, Paul McNamara has transferred to the club from the EFL.

Anthony Davies has departed, heading to the EFL.

At the time of writing, a number of transfers to and from the club were still listed as pending.

Blake Stegehuis and Luke Toebelmann are likely to be playing for the Lions after time in the EFL and Blake Tolley is planning to join the club from the Loddon Valley Football League.

After limited senior opportunities with the Lions, and spending last season in the Reserves and the thirds, Luke Wentworth has applied to transfer to the VAFA.

The Lions have now spent the last two seasons in Division 3, finishing seventh both times.

South Yarra starts its attempt to climb higher on the ladder when it visits Lyndale at Barry Powell Reserve on 9 April for Round 1.

New Lyndale coach, Brad Bruni has joined the club after three seasons on the coaching panel at SFNL Division 2 side Springvale Districts.

“The coaching sub-committee were very impressed with Brad’s understanding of the SFNL as well as his plans for the club next season and beyond,” says the Lyndale website.

Bruni made it a focus to boost the size of the Pumas’ playing list to ensure there is strong competition for spots come selection time for Round 1. This was necessitated by Lyndale’s slip to eighth spot in 2015, after a Preliminary Final appearance the previous season.

He describes the positive outcome of recruitment efforts, and the confident outlook he holds for the 2016 season.

“The excitement level around the club is very high as we have had about 15 new guys join the club, all who are pushing for selection in Round 1,” Bruni said.

“We are trying not to focus too much on last year as we have so many new guys and have implemented a whole new game plan. Overall I think we have put together a very strong squad and hope to be playing finals come the end of the year.”

Bruni mentions a couple of the recruits he believes will have a big impact.

One is Justin Doust, a playing assistant coach who has come across from Springvale Districts with him. Bruni notes Doust can play in any position.

Another new arrival Bruni highlights is Taylor Rainey whom he describes as “big bodied” and able to play as a midfielder or forward. Rainey brings senior experience from Doveton in the SEFNL.

“I’m really looking forward to seeing him in action this year, I think he can definitely be a top 10 player in this competition,” Bruni said.

Rainey has impressed at training since November and has earned a spot in the Pumas’ leadership group.

Bruni spoke about the others in the leadership group.

One of these is Matthew Stuart, coming back to the club after a stint at Heatherton. Bruni praises his hardness and dedication to training.

Ben Laier also joins the leadership group. He is “another new guy from Springy who has gained the respect of the team with his good voice and leadership skills on the track,” said Bruni.

The other leaders are continuing captain Brett Tosh who won the player vote comfortably, and vice captain, Adrian Mattiuzzo, who Bruni describes as “a solid backman who rarely gets beaten”.

There has been far more significant transfer activity coming into Lyndale than going the other way, but Damien Wilsnach is a notable departure. He featured in 13 senior matches for the Pumas in 2015, being included in the best players list several times. He has gone to the VAFA.

Lyndale has a good chance to improve significantly on last year’s ladder position.

That challenge begins at Lyndale’s home ground, Barry Powell Reserve, when the Pumas clash with South Yarra on 9 April.