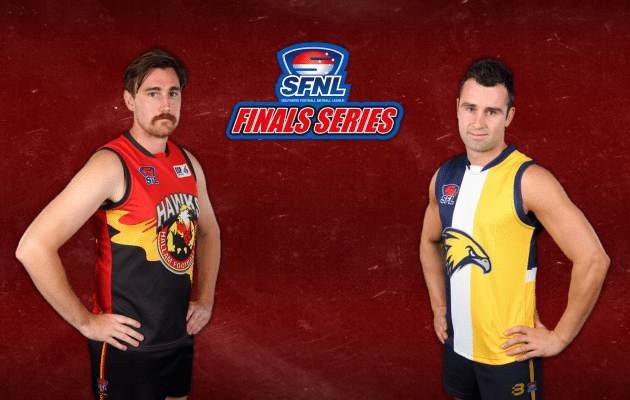 Hallam coach Scott Slater says that despite a Semi Final loss to Endeavour Hills the equation remains the same for the Hawks.

They came into the finals series needing to win twice to lift the cup and that still holds true.

This week’s challenge comes in the form of a confident Doveton.

The Eagles backed up an Elimination Final win over Black Rock with a hard-earned victory against Ashwood.

Hallam won both clashes with Doveton during the home and away season, triumphing by just nine points in the most recent meeting.

Little can be read into the other 2017 encounter between the sides when a significantly understrength Doveton proved no match for the Hawks in Round 6. On that occasion, the margin was 79 points and the SFNL radio team was left to rue selecting the game as the Match of the Round.

There should be no concern about a one-sided affair this time. Both teams are in good form and it will be a tough stoush.

Slater expects the game to be played hard but in good spirits, in what is a local derby.

“We get along pretty well as clubs, Doveton and Hallam,” he says.

Whichever way the result goes the sides will enjoy a few beers together when the battle is over.

Doveton coach Simon Caldwell expects the key to his side’s chances will be its ability to shut down the game when Hallam gets momentum.

He says the Eagles’ ability to maintain tackling pressure will determine whether or not they can achieve that.

Caldwell contrasts his side with the other remaining premiership contenders.

“We’re the odds ones out. They’re very similar Hallam and Endeavour Hills, how much they run. We’re probably a bit more of an inside team.”

He believes the fact a number of Eagles’ players have played in a premiership may prove a decisive factor in such a high-pressure game.

Doveton was straight down to the beach after its Semi Final win so the players could soak in the bay’s healing waters. But Caldwell won’t be using a six-day break as an excuse if Hallam comes out on top.

The Hawks have an extra day’s rest, a fair outcome given they finished top of the table.

Caldwell will be delighted if forecast showers in the lead up to the game come to fruition, believing a slower game will suit the Eagles.

Hallam should be able to recall midfielder Justin Marriott, forward Steve Sigeti and backman Steve Chin who were unavailable against Endeavour Hills.

There is a question mark on the fitness of Doveton’s ex-Melbourne veteran Russell Robertson who looked in considerable discomfort just prior to half time against Ashwood.

He didn’t return to the field for the remainder of the game.

Caldwell concedes Robertson has a few niggles and was badly winded but downplayed suggestions he suffered a rib injury.

Expect Hallam to get home in another entertaining clash in what is proving to be an absorbing finals series.