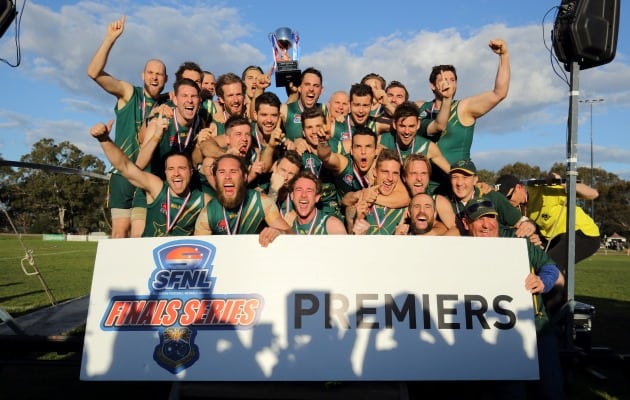 After a week that threatened to turn the Grand Final into something resembling water polo, it was a joy to see the sun shining brightly at Heatherton.

Ashwood and Mount Waverley delivered an entertaining start to the contest with a total of ten-goals-straight between them in the first term.

The Magpies exhibited a couple of moments of brilliance during that period.

A piece of Paul Wineberg genius occurred when he knocked the incoming ball down to Frank Martinicchio who snapped truly.

A stunning interception and pass from Michael Collins again found Martinicchio. He made no mistake and put the Magpies a couple of goals ahead at quarter time.

With six majors for the term, it was an impressive effort up forward for Ashwood.

However, Mount Waverley’s ability to conjure four goals into a strong wind was ominous.

The Mountain Lions quickly took advantage when they had the breeze behind them in the second quarter.

A long kick resulted in a Mount Waverley goal, cutting the Magpies’ lead to five points.

When Drew Macrae snapped a major shortly after, the Mountain Lions edged ahead.

They continued gathering momentum, increasing their lead to 23 points by half time.

Ashwood needed to make decisive use of the breeze in the third term.

Mount Waverley’s coach, Nick Smith best summed up what happened in that term when he spoke to the SFNL radio team after the game.

“Our third quarter really sucked the life out of them, when we outscored them into the breeze.”

In fact, such was the Mountain Lions’ dominance they added 3.2 to nothing, ensuring they would be able to enjoy the last quarter.

Ashwood managed the first goal of the final term, but Cliff Aikman replied for Mount Waverley.

Fellow Mountain Lion, James Gough followed up soon after with his fifth and final goal of the contest.

Despite having the game sewn up before the last term, the Mountain Lions continued to work hard until the final siren.

Dylan Cincotta was inspirational for Mount Waverley throughout the match, burrowing into packs to win the footy and using it with aplomb.

He put the icing on the cake with a last quarter goal and added the Meneilly medal for best on ground to his premiership medallion.

Jarrod Wilkin was a strong performer and regularly gave teammates opportunities with his decisive ruck work.

He was finally rewarded for his loyal service to the club.

He is one of three Mountain Lions to have represented the club in its six losing Grand Finals over nine years.

Shane Costantino and Chris Jeffries are the other two.

Costantino mentioned to coach Smith prior to Saturday’s game that he needed to win to feel he could move on with his life.

Jeffries admitted to the coach after the match that his injured collarbone was actually fractured.

The injury occurred during Mount Waverley’s Semi Final win and Smith told Jeffries he would play him in the Grand Final regardless.

Jeffries’ last-quarter goal was greeted with wild celebration by his fellow Mountain Lions.

They knew how much it meant to him and what he endured to achieve the ultimate success.

Every Mountain Lion contributed to the win, but Matt Jeffries deserves mention for a commendable display in defence. He helped make it a tough day for Magpie Wineberg.

Matt Maginnes was again named Ashwood’s best and maintained his effort throughout.

Martinicchio was the Magpies’ most productive goal kicker with three.

It must have been quite a night back at Mayfield Park with the Mountain Lions’ reserves side also finishing the season undefeated.

Congratulations to both the Mountain Lions’ premiership sides and good luck in Division 2.

Although beaten at the final hurdle, Ashwood had an excellent season and it will be intriguing to see if it can go one better next year.