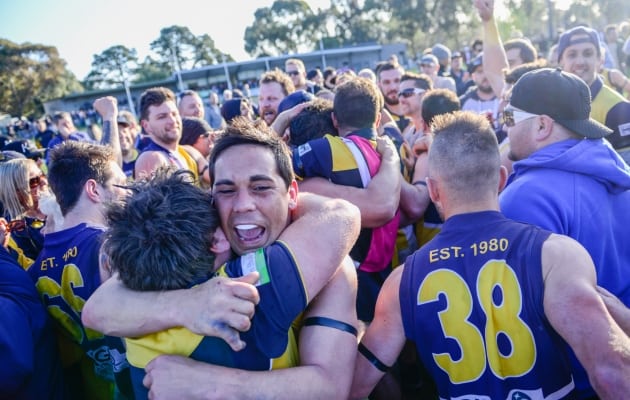 That was five minutes into the final quarter and Doveton had gone from a handy half time lead to a deficit of 26 points.

Since the long break the Falcons had registered nine goals straight to a solitary major.

“I thought we were gone. I started blaming everyone else,” Wilson admitted to the SFNL radio team.

“We were in shock. We were like 22 points up at half time, thinking we’ve got this one and all of a sudden bang bang bang and we thought we were gone, or I did.”

So did Caldwell watching from the sidelines.

Even when speaking on The 5th Quarter program the day after a stunning Eagles’ comeback, Caldwell reflected that he couldn’t believe the result.

“I was dumbfounded. I didn’t believe it happened from where we were. To get that result was just amazing.”

He credited his players with the barnstorming finish in which they booted 5.1 to a behind after Endeavour Hills managed the first couple of goals of the last term.

“I was pretty much spectating in that last 10, 15 minutes, just watching the guys do their thing,” Caldwell said.

Russell Robertson was well contained by Ben Moriarty throughout the game, but won a holding the ball free kick approaching time on. His shot sailed through for a goal, putting the Eagles up by five points.

Troy Hancock had sparked the comeback with a goal on the run.

Shortly after, Hancock’s handball set up Cory Wilson who kicked truly and brought the deficit back to 14 points.

An outstanding game from Doveton’s Adam Read had him in the running for the Meneilly Medal for best afield. His third goal 13 minutes into the final term reduced Endeavour Hills’ lead to eight points.

Mitch Clarke nailed a shot on the run six minutes later to put the Eagles just a point behind and that set the stage for Robertson.

Once Robbo delivered Doveton the lead, the Eagles swung into defensive mode.

It was an epic struggle in the dying minutes with Endeavour Hills getting the ball forward and pushing hard to restore the lead.

A Daniel Strom mark 25 minutes in set up a thrilling finish, but when his shot spilled off hands for a behind there were only moments left on the clock.

It was thoroughly deserved, although it could just as easily have gone to Read.

Cam Carmody was instrumental in the Eagles’ comeback as he got on top of Nathan Crutchley in the final term ruck battle.

Crutchley had a tremendous finals series and gave his side every chance in the Grand Final with his ruck work in the first three terms.

Eagles’ skipper Wilson started the game brilliantly and finished in style, being a major contributor in the last quarter.

Falcons’ captain Nathan Strom starred up forward and in the midfield and his young teammate Nick Gay ran himself ragged in an outstanding performance.

Hoe, Daniel Batson, and Moriarty were prominent for the defeated side.

Despite the disappointing result, Dipper can be proud of a tremendous year.

After stepping into the post this season, he guided the club into its first finals campaign at senior level.

Whilst acknowledging the progress made in 2017, Dipper was a shattered man a couple of days after the loss. He was still questioning whether or not he could have done anything differently.

However, Dipper considered the Eagles’ experience perhaps played a part in the game’s dramatic momentum shift.

“Maybe just some wise heads from Doveton, some guys that have played finals footy before maybe got them over the line,” he reflected.

He spoke of the approach the Eagles took to get back into the match.

“They had nothing to lose. They really took the game on and they seemed just to go long and direct.”

Expect Endeavour Hills to again be contenders in 2018 with Dipper hopeful of retaining most players and expecting to add more talented youngsters. But in the short term, that prospect is of little consolation.

For Dipper’s counterpart Caldwell, it was the perfect finish to his time in charge at Doveton.

Although he will stick around the club to help in other capacities, Caldwell made the decision some time ago to step away from coaching after this season due to other commitments.

But first there will be plenty of celebrating.

Congratulations Doveton on a tremendous achievement in winning four straight finals and on a memorable Grand Final comeback.

As for Division 3, a high-quality finals series has this scribe already anticipating the action next season.