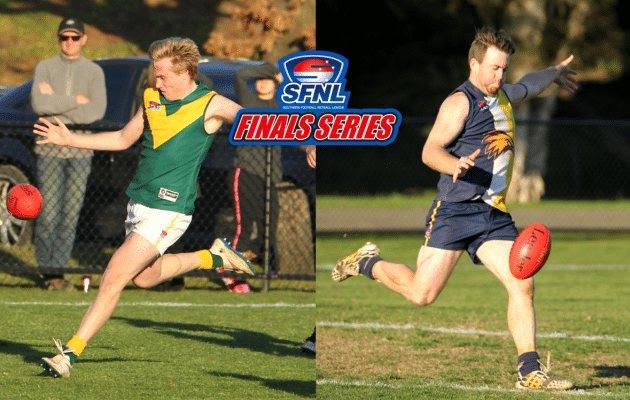 With a Grand Final berth on offer, an exhilarating contest hung in the balance entering time on in the final term.

So often the most anticipated matches fail to deliver, but Endeavour Hills and Hallam provided a spectacle that will long be remembered.

A classy snap from Phil Ward brought Hallam back within five points at the 15-minute mark of the last quarter.

The Hawks had led by a goal at the final change and coach Scott Slater urged his players to beat the Falcons for the first time this year. He was concerned the Hawks needed to win more centre clearances.

Slater implored his players to put their heads over the ball and prevent their opponents seizing the initiative. However, it was Endeavour Hills that made the early running in the final stanza.

A goal a couple of minutes in levelled the scores.

Star Falcon Daniel Batson then earned a holding the ball free kick and made no mistake with the resultant set shot, giving Endeavour Hills the lead.

Minutes later, Falcons’ skipper Nathan Strom ran into an open goal putting his side 11 points ahead.

That is when Ward stepped up.

His snapped goal was immediately followed by another Hallam forward surge, instigated by a long Manny Peresso kick.

As it had done on many occasions, the efficient Endeavour Hills’ defence repelled the Hawks’ assault. Hallam kept applying pressure and the Falcons continued to resist.

A couple of late Falcons’ goals put the outcome beyond doubt and Endeavour Hills celebrated a 16-point victory and a Grand Final spot.

Shaun Richards was outstanding all day and was a major reason the Falcons trailed by just 10 points at half time.

Richards’ second quarter was a stunning football exhibition as he cleared the ball from defence with extraordinary regularity.

His coach Rob Dipper spoke on The 5th Quarter radio show and discussed the contribution of his blonde number 21 to the team and the versatility he provides.

“Shauny Richards has been really good all year. He’s only ever played forward at the club and I could see something else in him.”

Dipper identified Richards’ long kicking and ability to take intercept marks as attributes that would stand him in good stead in defence. He noted Richards and Daniel Strom are working effectively in partnership and that both have been excellent in the Falcons’ finals campaign.

Defensive resilience was the key to Endeavour Hills working its way into the contest after failing to capitalise on a strong wind advantage in the first term.

By quarter time an accurate Hallam had grabbed its opportunities up forward, booting four goals straight into the difficult breeze.

At that point the Falcons looked in trouble, having managed just 2.3 to trail by 9 points.

Dipper showed no signs of panic at the huddle, maintaining his quietly spoken manner. His message was hard to hear for anyone outside the playing group, but his side’s response for the rest of the game suggests his communication style hit the mark.

18-year-old Nick Gay was a central figure in the Falcons’ win, marking at both ends of the ground and covering a lot of territory.

Many of the usual stars stood out for the defeated Hallam.

16-year-old Hawk Chris Raso did plenty to suggest he has a big future and Rory McIvor was another solid performer for Hallam.

Slater’s expectation that he may be able to name a full list was dashed with Steve Chin having a sore hamstring and Justin Marriott and Steve Sigeti unwell. But he wasn’t making any excuses.

“Endeavour Hills played a great brand of footy and deserved to be there. So we need to lift our game this week and hopefully have another crack at them in a couple of weeks,” he said.

There is every chance Hallam and Endeavour Hills will meet one more time this year on the day that matters most, giving the Hawks a chance for revenge against a club that has had their measure in all three meetings this year.

The final score fails to reflect what was a gripping Semi Final contest between Ashwood and Doveton.

A 32-point win to the Eagles was a harsh result for an Ashwood team that was right in the game until the halfway point of the final term.

Doveton was a deserving winner, but was made to work hard by a Magpies’ group that played as a team and showed real spirit.

Michael Callinan was a decisive presence for the Eagles creating opportunities with his marking and attacking play. The greater the pressure in the match, the more Callinan lifted and inspired his teammates.

In his quarter time address, Ashwood coach Mick Rossborough highlighted the fact Callinan was a focal point for the Eagles to bring the ball through the centre of the ground.

The Magpies were unable to quell Callinan’s influence in the midfield. He finished with three goals, as did Eagles’ teammate Enayte Samadi.

The match provided a marked contrast to Ashwood’s disappointing display in its Qualifying Final loss to Endeavour Hills.

Mitch Saunders’ return to the Ashwood side was one reason for the Magpies’ improvement. Rossborough praised Saunders’ ability to play a major role despite having a torn medial ligament in his knee that requires post-season surgery.

It was the Magpies who started the match brightly and registered the first goal and they retained the lead for most of the first quarter.

With rain falling, Doveton dribbled through a goal to hit the lead just before the first break. However, by half time the Eagles’ advantage was 20 points.

They appeared well placed despite an injury to Russell Robertson late in the second stanza that prevented the ex-AFL star taking any further part in the contest.

When Doveton booted the first major of the second half it seized a 28-point lead, threatening to put the result beyond doubt.

Such was the response from Ashwood that by time on it had a golden opportunity to hit the front.

However, Frank Martinicchio’s shot on the run from close range cannoned into the post, leaving the Magpies a point behind.

A late Corrie Wilson goal then gave the Eagles breathing space with an eight-point lead at the final change.

At three quarter time, Doveton coach Simon Caldwell stressed the need for his players to lift their intensity.

“I spoke to the guys about their tackle pressure. We’d been really good all day and then we dropped off. We had half the amount of tackles we’d had in the other quarters in that third quarter,” he said.

Ashwood never gave up, but was unable to bridge the gap and Doveton eventually took charge after applying relentless pressure.

The Eagles reached their tackling benchmark of 18 to 20 a quarter in the final term as they did throughout the first half.

Adam Read was a major contributor for Doveton and booted a couple of goals.

Magpie Josh Stanton worked tirelessly throughout the match helping keep his side in touch.

Veteran Paul Wineberg was another solid contributor for Ashwood, both in the ruck and around the ground.

But it was Doveton’s day.

Rossborough conceded the Eagles were too good, being the better side for longer periods and capitalising when the Magpies dropped off a little.

Doveton will take on Hallam for a chance to meet Endeavour Hills in the grand final.