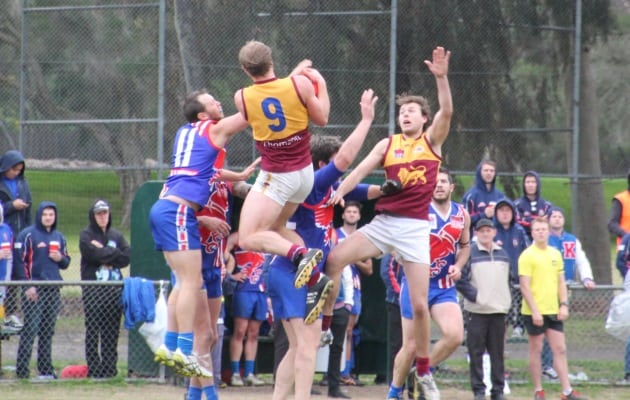 The Rockers won 14 games to finish as minor premiers and have added several players from the VAFA, including Chris Smith (Old Haileybury), Jack Carroll (Mazenod) and Chris Ryan-Peek (Oakleigh) in an attempt to bolster their depth and be competitive in the second flight.

With the likes of David and Thomas Dewar leading from the front with the experience of Kelly Spratt and 2015 leading goalkicker Ben Morrison, Black Rock are primed to take on the challenge of staying in division two.

The Bears came within eight points of a grand final berth last year and were the second most improved team in the competition behind Murrumbeena, the side it lost to in the preliminary final.

Caulfield has picked a strong utility player in Nick Gilbert from St Pauls, whose strong pre-season form in front of the sticks suggests he is more than capable of adding to their forward depth, particularly given Adam Connell (57 goals in 2015) is no certainty to return.

While they have lost a few depth players, the Bears still possess the strength to be fighting for a top five spot at the end of the season. The likes of Jake Buggy, Jason Twirdy and ruckman Adam Ballard head up a strong midfield core, while the dependable Anthony O’Shea shapes as a key in defence.

The Heighters will be disappointed to have been relegated back to Division 2 after being a top-grade powerhouse not too long ago so expect the boys from Beazley Reserve to be up and about right from the get go.

They’ve picked up a bevy of players in the offseason including old hands Phil Smith and Ash Beasy who will pick up the slack up forward, while the likes of Luke Behin from Oakleigh Districts will compete hard all season. Smith in particular looms as a dominant force down in Division 2.

With young gun Jordan Peryman coming into his own and an early favourite for the division two best and fairest, Chelsea Heights will be back at the pointy end of the ladder come finals time. There relegation may indeed be short-lived.

After a strong 2014 campaign, the Hammers fell away slightly in 2015 as injuries hampered their efforts at back-to-back finals appearances. In saying that, Hampton still won 10 games and were in many respects stiff to miss out on percentage so the talent is still there at the Toolbox.

The club’s turbulent off-season saw the departures of coach Ben Lockwood (East Malvern) and gun forwards Scott Fiora (East Malvern) and Joel Hanlon (Alberton). However, the club has also brought in some key talent in Paddy Bolger from Cheltenham and Luke Walsh (Oakleigh Districts), which will go some way to covering those losses.

The likes of Todd Crane, Chris Grove and Justin Isaac are still at the club and Josh Burbidge is already a star and one of the best young midfielders in the competition. These players will help keep Hampton from sinking towards the bottom end of the table and stay in finals contention.

2015 was a tough year for Heatherton, finishing 9th in Division 2 a year after being relegated from first division. And there is no doubt the Tonners will need to drastically improve on last year if they’re going to remain in Division 2 in 2017.

Matt Jamieson had a strong year in front of goal for the Tonners, booting 37 majors and will look to spearhead the attack again but it could be another tough year ahead for the boys from Ross Street.

Highett are one of those interesting teams that remind me a lot of Dr Jekyll and Mr Hyde. I’ve seen the Dogs put in some sensational performances and knock off the top sides but I’ve also seen some disappointing losses to the bottom sides.

But once again Highett will be in contention for a finals spot with the inclusion of Elijah Shawcroft from Bentleigh as well as a couple of handy players from the VAFA in Chris Long and Jordan Thompson. Highett has also managed to retain the majority of its senior players from last season. However, the loss of key Dog Jacob Duscher to VFL club Frankston may be hard to cover.

Tom Brown was a gun up forward with 28 goals last year while Beau Jedd and Jess Elms1 also had good seasons. If these three players can continue to perform the Dogs have a shot at playing finals.

The Southern Football Netball League’s newest football team started in 2015 like a house on fire, quickly establishing itself as a premiership contender. When superstar forward Tyson King went down with an ACL tear however, their premiership hopes suffered a hit before they eventually lost to Caulfield in the semi-finals.

With King set to return during the season, Keysborough will rely on a strong midfield core including the likes of Tim Bacic and reigning Bennett Medallist Geoff Humphreys, while Will Gayfer is a certified star down back.

With Mathew Collett and Davor Rajic leading the way inside the forward 50 arc until the return of King, if Keysborough can continue its form that led to a top three finish in 2015, a premiership is well within reach.

The surprise packet of 2015 became a hard nut defensive unit that prioritised pressure on the ball and creating turnovers. No one expected the Beena to reach a grand final and although they went down to Oakleigh Districts, the improvement from the club is undeniable.

Although Kane Downing and Tom Cameron have left the club during the offseason, the return of Jake Semmel gives Murrumbeena another dangerous midfielder who is capable of kicking a bag while the inclusion of Josh Lewtas from Mordialloc will also reap rewards.

With coach Stevie Wright calling the shots and captain Mitch Walder leading by example, Murrumbeena are no longer a surprise packet and if they can continue to exceed expectations, are a legitimate premiership contender.

The new face in division two also comes in as the unknown after crossing over from the Western Region Football League off the back of a bottom placed finish in division one with only one win.

With the switch to a new league comes a fresh start and the Colts will be looking to give a good first impression and have recruited several players and coaches to help. In particular, forward Justin Taylor returns to the club, while Jason Butty has signed on as a playing assistant coach under Brad Julier. I also expect their existing talent, especially explosive midfielder Brad Sutcliffe and experienced defender Torren Bonnett, to also have a big impact.

Like Keysborough before them, Port will be aiming high and will have all eyes on them during the first month of the season as the opposition makes their assessments. But given their talented list, they will certainly be giving the competition a big shake in their SFNL debut.

After a grand final appearance in 2014 against Mordialloc, Skye’s 2015 was wrecked with injuries with key players Aaron Pacey and Travis Kitchin all missing significant time, resulting in a fourth place finish and a loss in the elimination final to Caulfield.

The Bombers have been a bit quiet on the transfer front with not a lot of movement during the offseason. Mark Fedderson’s move to Cairns was perhaps the club’s biggest loss while the inclusion of Shaun Thomas, Liam Aghan and Craig Dawson will help improve the depth a side that was tested in that area last year.

With the likes of Jim Martinson, Ben Evans, and coach Ben Walker still running around, Skye will once again be there abouts. However, the club will be hoping a number of key players, including Pacey (set to come back from a knee reconstruction after their first bye), can return to the side in time to maximise the club’s prospects of playing finals.

2015 was also another disappointing year for Springvale who, despite having the best home ground in the Southern Football Netball League, were not able to take advantage of it at times throughout the year.

Although the Districts have lost a lot of players from last year’s squad, it has picked up quite a few during the offseason in an attempt to move their way back up the ladder. Players like former Dingo Todd Wills, ex-Endeavour Hills speedster Josh Dart and Jack Allender (Bonbeach) will have to be at their best to lead Springvale back towards finals contention. But the young talent they have secured will hold the club in good stead in seasons to come and in I am particularly keen to see hulking full forward Sam Blackburn in action.

But similar to Heatherton, it could be another tough year for Springvale and it could quickly find itself in the battle for relegation if it doesn’t get away to a good start.