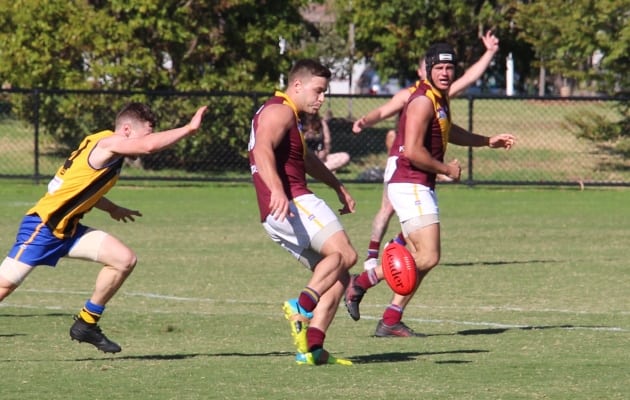 The Southern Football Netball League Division 2 competition is underway with several surprise results the highlight of the first round of the season.

A ripping contest from start to finish saw the Dogs travel to Hurlingham Park and overcome a very gallant Vampires outfit by 14 points.

Recruit Ed Turner was sensational in his debut, bagging seven goals in a best afield effort and stamping himself as a player to watch in 2018.

Two more recruits in Nathan Scott and Charlie O’Neil were also impressive in their debuts while Sam Jackson put together a strong game.

Highett seemed to be in control of the game after the first quarter, where it led by 24 points, but the host side booted six goals in the second to trail by just two points at the main break.

East Brighton capitalised on the shift of momentum during the third term, kicking three goals to two to take a four-point lead into the last, but the visitors were too strong in the last to run away with a 14-point win.

While this was a decent first round clash for Skye, which I think might struggle a tad this year, it wasn’t able to overcome Caulfield in a close result, after trailing by 29 points at quarter time.

Big name recruit Cameron Roughead starred for the Bears inside 50, providing a focal point with five goals while Chris Ryall and Sam Edgerton were also impressive.

A big first term from the visitors saw them kick five goals to just two behinds, resulting in a 29-point advantage at the first change.

Skye slowly started to chip away at the lead across the next two quarters, getting to within 21 points by half time, and 15 points by three quarter time.

Although the Bombers were able to win the final quarter, kicking 2.3 to two straight, the Bears had done enough to hold on for a 12-point win.

Jarryd Karadees and Chris McCann were named as Skye’s best in the loss.

Keysborough announced its intentions this season with a resounding victory against Mount Waverley at home, to the tune of 87 points.

The Burra finished with seven multiple goal kickers in the win, led by Chris Bryan and Tim Werner with four goals apiece.

Jack Cole was impressive in his first game of the year, named best on ground, while Luke Damato and Michael Downie were also in strong form.

Keysborough enjoyed plenty of football in the first term, but were slightly wasteful with five behinds, resulting in just a 17-point lead.

It was a completely different story from then on however, as the home side banged on another nine goals to two in the second to lead by 57 poins.

While Keysborough wasn’t as potent in the second half, kicking 10 goals to five, it showed it will be a premiership contender with a confident win.

Caleb Schultz and Joseph Rickard combined for seven goals for the Lions with Ben McLeod named best on ground.

The Eagles announced they were here to stay at the bare minimum on Saturday, demolishing relegated Clayton by 102 points.

Key recruit Ryan Hendy and Peter Dye were dangerous inside the forward arc in the win, each kicking six goals with another key recruit in Nick Battle booting three.

Hendy and Battle were super impressive in their debuts and were named among the best with Travis Graeske listed as best afield for the winners.

Doveton was relentless right from the word go, booting four goals to one behind in the first before adding five goals in the second to lead by 45 points at half time.

The Eagles were just as good if not better in the second half, slamming on another 13 goals to four to run away with a resounding victory.

It was a perfect performance, but premiership favourite Murrumbeena got its season off to a strong start with a 12-point win against Hampton at the Toolbox.

Gun recruit Luke James was impressive in front of goal with six majors in his debut, but inaccurate kicking from the visitors, including nine behinds in the last quarter, was a major downside.

Jordan Cusin was named best on ground for the Beena alongside former St Pauls captain Harley Ambrose and another recruit in Nathan Macdonald.

In a hard-fought contest, neither side could make a big impact on the scoreboard and by the half time break, it was Hampton leading by six points.

Murrumbeena improved in the second half, with four goals in the third to take a 10-point lead and should’ve kicked away in the last, but only ended up with a 12-point result.