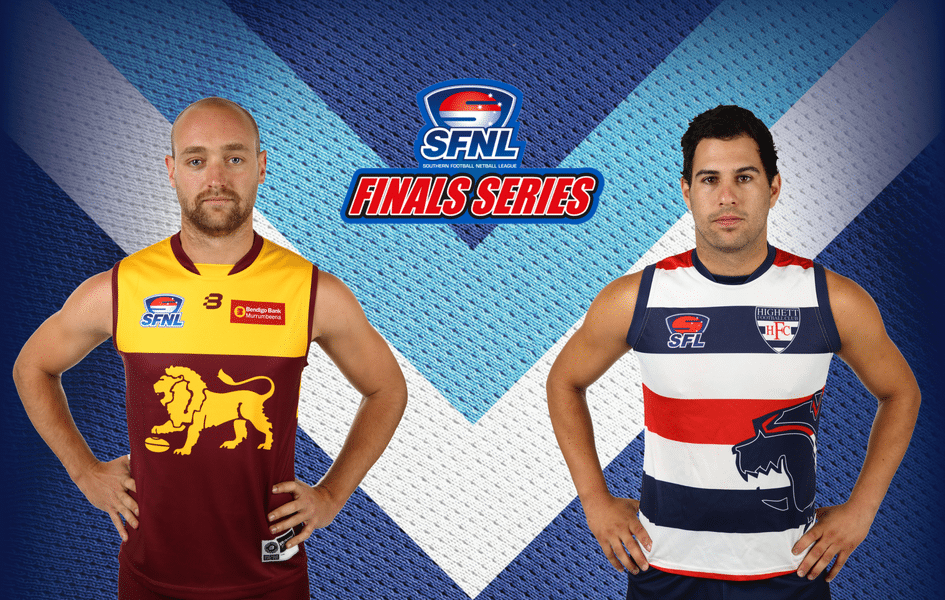 Its finals time in Division 2 and two big matches highlight the first week of the series, as Murrumbeena takes on Highett and Keysborough clashes with Caulfield with both games to be played in Heatherton.

A huge clash between two of the best sides in the competition and two of my three big time premiership contenders.

Looking at Murrumbeena first, the big offseason recruits have played a big part in bringing it to a top two finish and the double chance, with star forward Luke James combining well with Alaster Bradley with the duo combining for 103 goals between them.

The midfield stars in Jay Bruno, Owen Lewis and Harley Ambrose have also fitted in seamlessly and provided plenty of firepower next to Jake Semmel and Liam Wilson.

But it’s the side’s lesser known stars that have made the Beena into the premiership contender they are with the likes of Tommy Valenta, Eduardo Espinosa (27 goals) and Chris Niclasen that have excelled consistently throughout the year.

The X factor for me is still Luke James and when fit and healthy electrifies the competition with his nous around goals, while Jake Semmel is a star in the midfield.

I’ve been impressed by Espinosa as well and he provides a threat that opposition backmen can’t ignore.

Highett also boast a series of offseason recruits that have been impressive, with Ed Turner, Brett Collins and Kyle Hendy providing 108 total goals for the dangerous Dogs.

While Turner has been the most impressive of the trio, they’ve formed a formidable combination with the likes of Yianni Pasialis, Mitch Hoar and Jordan Thompson enjoying strong seasons.

Midfielder Tom Brown is still one of the best players in the Dogs’ line-up with stalwarts Pat Singh and Beau Jedd able to influence a game with their best football.

As most games generally are, this will probably be decided in the midfield and although Highett will come close and it wouldn’t surprise me if it gets the win, I can’t go past Murrumbeena at its best to move on to the Second Semi Final.

It seems like an age since the Round 7 meeting between the two sides occurred, with both of these sides experience slumps of sorts during the second half of the season.

While Keysborough has shown an ability to bounce back from disappointing losses, is coming into the game on a two-match losing streak and will again need to find winning form.

The Round 7 win against the Burra was the start of a four-match win streak for Caulfield, but it ended to begin a six-game losing streak which nearly cost it a finals berth.

The Bears were able to rebound and win their final two games of the season, including a do or die battle with East Brighton and will look to continue their winning form.

Starting with Keysborough, its biggest strength throughout the season has been its firepower inside forward 50, with Chris Bryan and offseason recruit Matthew Carnelley working well together.

The pair has combined for 113 goals with Bryan leading the competition with 73 majors for the home and away season.

While Bryan has been the star, offseason addition James Anwyl has been highly impressive along with regular contributors Bryce Sutton and Geoffrey Humphreys.

Although he hasn’t played since round 16, former captain Ryan Goodes has found form through the midfield while Cory Hargreaves has been an X factor as a forward, booting 25 goals.

As it has in the past, Caulfield hasn’t relied on a big booming key forward to kick bags of goals week in week out, but relies on a number of players to kick a winning score.

The best of those has been offseason recruit Cameron Roughead (28 goals), who started the season in fantastic form before dropping off during the middle part of the season.

As the Bears have improved, so has Roughead and he’ll be one to watch.

Chris Ryall has been a standout for the season, named among the best 10 times in 12 games, while Joel Grimmond, Jake Buggy (16 goals) and ruckman Adam Ballard have also been impressive.

This game is sure to be an exciting contest and it’s hard to pick given recent form, but despite losing its last two, I think Keysborough will be too strong in this one.