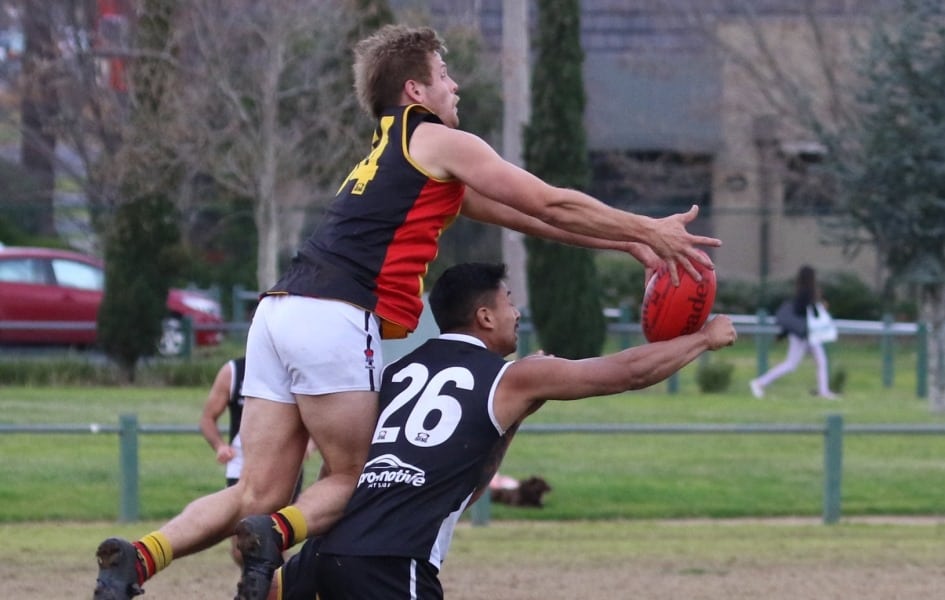 Port Colts have gone some way to ensuring their survival in Division 1, pipping Chelsea Heights by four points in a thriller at JL Murphy Reserve.

The win moves the ninth-placed Colts four points clear of the Heighters, who are now in the box seat to be relegated at the end of the season.

The hosts got out to a fast start, booting four goals in the opening quarter, but Chelsea Heights fought back with three of their own in the second to grab a slender half time lead.

There was little between them on the scoreboard for the remainder of the day, but it was the Colts that were more composed in the dying stages to reverse their previous result at Beazley Reserve in Round 6.

Nathan Doble stood tall for the winners with an inspired performance, with Max McNaughton, Jake Wood and the Coburg VFL-listed Max Mitchell-Russell also listed among the best.

The experienced Daniel Campisano led the way for the Heighters, while defender Harry Czarnecki made the most of his move forward booting three majors.

Bentleigh couldn’t capitalise on its early ascendancy, coughing up a handy half-time lead as East Malvern claimed an important 15-point win at the Zoo.

After a hard-fought opening stanza, the Demons booted five goals to one in the second to put the Panthers on canvas and enter the sheds 23 points to the good.

It was as good a half of football as Bentleigh have produced in several weeks, however, they couldn’t maintain it for the full four quarters as the hosts lifted their intensity after the long break.

From there the Panthers booted eight second half goals to two, steamrolling the Demons to ascend to third on the ladder.

Ruckman Chris Carey returned to the Panthers side after several weeks in the VFL, and underlined his importance with a superb performance that included three goals.

Alex Hywood and Lachie Dowling also hit the scoreboard with two each, while Dan Gauci and Dylan Morton were also influential.

The Dingley resurgence has continued with a fourth straight victory, this time besting the red-hot St Kilda City by 29 points at the Peanut Farm.

Both sides came out firing in an entertaining first term, before the Dingoes took control of the contest in the second with five goals, which propelled them to a comfortable 26-point advantage at the half.

It proved a decisive break, as the Saints through everything at the Dingoes, but could make no meaningful inroads into the deficit in the second half.

Jack Ades was in everything for the Dingoes, while Kristen Feehan did a great job in defence on the dangerous Shem Tatupu.

Young ruckman Josh Hicks – a 2018 SFNL Under 19 Interleague representative – also showed he was up to the level after impressing in his third senior game.

For the Saints, Aaron Purvis and Oscar Don won plenty of the footy, while Mykelti Lefau booted three goals.

The Rosellas are still in the finals race after their thrilling five-point triumph over Oakleigh District on the road.

Neither side was able to gain a decisive advantage for much of the first half, before two goals in the final minute of the second term to Cheltenham spearhead Josh Fox gave his side a 14-point lead at the major interval.

There were plenty of ebbs and flows as both sides jostled for the lead after half time, before the visitors produced a late match-winning burst.

In a grandstand finish, Sandringham VFL star Dylan Weickhardt put the Rosellas one point ahead in with a classy goal the shadows of time on, before Fox set up Tim Wigney for the sealer less than a minute later.

From there, Cheltenham held the pressing Oakleigh District at bay and record a nail-biting victory at the final bob.

Weickhardt was simply a class above, particular in the clutch moments when the game was there to be won, while Jackson Barclay and Brendan Dillion also played starring roles.

Fox made the most of his opportunities in attack, finishing with three goals and several big contested grabs.

It was far from pretty footy, but Doggies coach Jason Heffernan wouldn’t have minded as his charges held out Mordialloc by six points to scoot two wins clear atop the Division 1 ladder.

It was a match that had plenty of stoppages but few highlights, and while as a spectacle there was plenty to be desired, the lack of scoring ensured the contest was tight for the entirety of the afternoon.

The match was also marred by a heavy collision that resulted in reigning Ellis Medallist Matt Kreymborg being taken to hospital with concussion.

In the end, it the superior fitness of the Dogs that helped get the job done late in the game once again, as they booted the only two goals of the final term to turn a 10-point three-quarter time deficit into another come-from-behind victory.

Matt Herbsteit was a clear best on ground for the winners, winning plenty of disposals across the park, while Lachie Butler, Curtis Murfett and Alex Spencer also stood out.

Ben Humphrey, Danny Nicholls and Tim Kovess were exceptional around the contest for the Bloods.