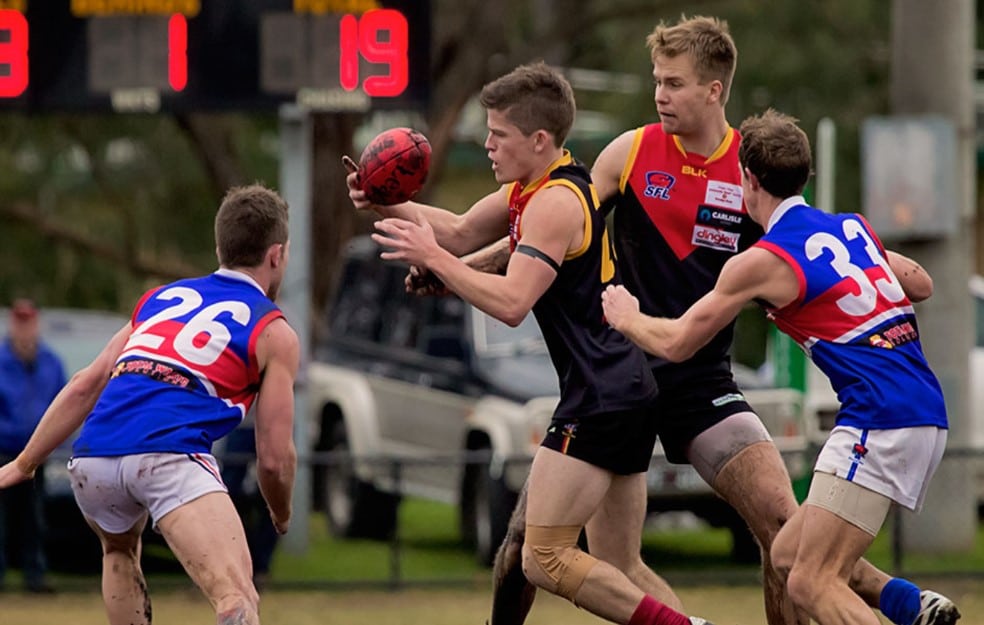 Dingley have booked themselves a date with East Brighton in the Grand Final after a heart-stopping four-point win over St Pauls in the Preliminary Final on Sunday afternoon.

The Dingoes were on the canvas but clawed their way back from the brink in the last quarter to pinch a memorable victory with a goal in the dying seconds of the match.

The first half was a real treat, with both sides playing hard, tough, fast, uncompromising football befitting of finals status. With neither team taking a backward step, it was always going to be a close contest and there were never more than two goals between them at any stage.

When the two sides entered the sheds for the long break there was just two points in it, with Dingley taking the honours.

St Pauls was dealt a blow five minutes into the third term when champion Luke James was stretched off after copping a big knock, but despite this setback the Dogs stepped it up a notch and really started to get on top. Two goals gave them some breathing space, but a late one to Dingoes dynamo Luke Walmsley kept his side in the contest.

But the Dingoes looked gone for all money at the 10-minute mark of the final term when Travis Ridgeway nailed back-to-back goals to extend the Dogs’ lead to 20 points.

Staring down the barrel of a straight-sets finals exit, the minor premiers staged a remarkable fight back, banging on three goals in five minutes through Andrew Stock and Luke Bartholomew to get within two points.

The stage was set for an epic climax and Dean Francis didn’t disappoint. The Dingley spearhead took a strong grab before going back and calmly drilling the match-winning goal in the final minute of the game.

Francis finished with four majors for the match, as did hard-running midfielder Bartholomew.

Tony and Brett Lavars were sensational down back for Dingley, while Jack Clausen and Josh Boyle were also hugely impressive.

But it was Walmsley who was again the clear standout, winning plenty of the footy and taking the game on in another eye-catching, best-afield display.

Adam McIntire, Jarryd Allen and Andy Gilbert were the biggest contributors in the Doggies’ engine room, while Mark Marasco’s work in defence was first-rate.

Preliminary final week has come and gone and with a spot in the Grand Final up for grabs, it was sure to bring out some good football.

For a chance to play in the 2014 Division 2 Grand Final against Mordialloc, Skye took on Hampton in a match that promised to be a hard fought and highly contested match. Skye went into the game with a 2-0 record against Hampton in the 2014 season and were deserved favourites among the punters. With neither side known for their high scoring, a defensive battle ensued both teams fought for ascendancy in the first quarter.

With the sun blazing down, conditions at Jack Barker Oval were prime for finals footy and as the match began, it began with an intensity that was worthy of finals action. As the game had promised, the first quarter was a defensive struggle for both sides as neither side were able to capitalise on their opportunities early on. The big ground that is Jack Barker Oval provided plenty of running play and it was evident early on that that style of play was going to result in plenty of scoring opportunities. The Bombers were able to use the footy more efficiently in the first quarter and despite being inaccurate in front of goals, went into the first break with a 7 point lead.

The second quarter started out much like the first, both sides locked in a battle to gain ascendancy. Through the likes of Ben Telindert Marc Fedderson, the Bombers started winning the ball through the middle of the ground and this provided plenty of scoring opportunities for the Skye forwards who took full advantage. But it wasn’t made easy for them by the Hammers as they fought back with a major of their own and with Chris Worner proving to be the dominant forward, the Hammers only trailed by 12 points at half time, still within striking distance.

The game began to open up a touch in the second half but still, inaccurate kicking proved costly for both sides and they failed to take advantage of the many scoring opportunities throughout the game. Skye once again took ascendancy in the midfield through the experience of Jim Martinson and Aaron Harper. Though Hampton star midfielder Justin Isaac was being well held, Dan Guiry and Josh Burbidge helped keep the margin from blowing out and though they had only managed 4 goals through 3 quarter, Hampton only trailed by 17 points going into the final quarter.

With everything on the line going into the last quarter, both sides gave it one last crack. Hampton began the quarter attacking the footy but were unable to push past the Skye defence which has been resolute all season. At the other end, Skye were having their own scoring troubles. Though Luke Mcguinness was provided a target up forward on his way to 4 goals, Hampton were able to repel many Skye advances through the likes of Nick O’Donovan and Aaron Shedlock. But soon after, Skye began to dominate with key players such as Travis Kitchen and Ben Evans routinely winning the football and slowly pushing the result in Skye’s favour. In the end Hampton were unable to bridge the gap, ultimately succumbing to defeat to the tune of 18 points. Though their season is now over, it has also been a raging success and they are the team to watch in 2015.


Dingley will meet Bentleigh in the 2014 Under 19s grand final after beating Clayton by thirty points in the preliminary final. Just one point separated the two sides at three quarter time, even though the Clays had had four more scoring shots. However the forward potency of the Dingoes, through Caelin Brooker and Vincent Arena proved too much for Clayton, with the pair combining for seven goals. Jack Day and Perry O’Hehir-Vargas were resilient for Clayton, but couldn’t do enough in the last quarter, the Dingoes were too fit and ran away with the match. They are now faced with the daunting task of taking on the undefeated Bentleigh in the season decider!

A last quarter avalanche of goals has rubber-stamped an impressive performance and has sent Dingley into the Thirds grand final, keeping the dream of back to back premiership alive. Michael Jeddou and Mark Wonnacott ensured the Dingoes got off to a fast start, with Endeavour Hills battling to stay in the contest. Even though the Falcons’Nathan Proctor kicked three goals, the class gap was telling, with eight goals to one in the last quarter underlining the Dingoes’dominance. Peter Rizzi and Joel Billing both kicked three for the victors, and 11 players in total got onto the scoresheet.

The Dingoes will now face the Skye Bombers in the grand final this week, after both sides have shared the spoils throughout the year.