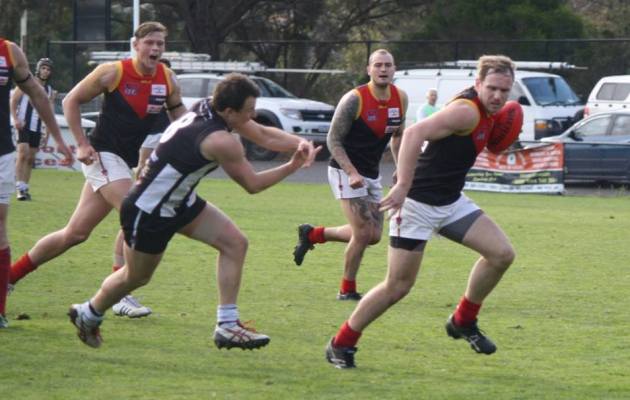 The penultimate round of the SFNL Division 1 season saw most of the finals-bound sides record comfortable victories. However, as usual, there was one result that didn't quite follow the script.

St Kilda City had a glimpse of the future on Saturday and it looks mighty rosy. With their Under 19s side not playing after Highett's forfeit, the senior side was bolstered by the addition of no fewer than nine of these promising youngsters. This meant the team featured a staggering 19 players under the age of 22. And it paid handsome dividends as the Saints posted a come-from-behind 31-point win over Mordialloc at Peanut Farm. The Bloods got the jump on the home side early to lead at the first change, but from then on the Saints dominated in every facet of the game. Seven final-term goals sealed the deal, and ensured retiring veteran Mark Tasiyan went out on a high. Tasiyan booted six goals in his final game, while teenage ruckman Ayang Nyanjok was also influential. James Morris booted five for the losing side.

In other games, Clayton proved no match for the might of Dingley, slumping to a 71-point defeat at Meade Reserve. The Dingoes flew out of the blocks with eight goals in the opening stanza which set the tone for the rest of the afternoon and despite the best efforts of Chris Lee and Rob Palazzolo, the Clays simply weren’t able to force their way back into the contest. Dean Francis and Calhan McQueen booted 11 majors between them for the winners and Luke Bartholomew was also influential through the middle.

East Brighton continued its red-hot form, thrashing Cheltenham by 90 points at Hurlingham Park. The Vampires were simply unstoppable in the second half, conceding just one goal to turn a nine-point lead at the long break into a near triple-digit demolition. ‘The Big Show’ Phil Smith booted six goals and Toby Mahoney was also instrumental for East Brighton, while the consistent Dan Vaughan starred off half back for the Rosellas.

Meanwhile, a Matt Terech-masterclass in the ruck helped east Malvern to a whopping 89-point win over Bentleigh at Dunlop Reserve. Twelve second half goals to three highlighted the Panthers' dominance, with Michael Cooke (six goals), Mark Ryan (six) and Clint Johnson (five) contributing the bulk of their side’s 23 majors. The two Scotts - Lawry and Mortimer – worked hard all day in what was another tough day at the office for the Demons.

The final game was an all-too familiar story for Chelsea Heights, with St Pauls running out victors by 94 points at the Kennel. The visitors simply had no answers for the Dogs’ midfield dominance, with Rhys Peet, Liam Wilson and Brendan Dawes finding plenty of the footy and Jarryd Allan booting five goals up front. Jordy Peryman was yet again the Heighters' best and their only multiple goal kicker, though Pat Morrissey provided ample support.

Round 17 brings us closer to finals and the ladder begins to take shape after the weekend’s results.

Skye continue to play itself into good form in the run to the finals with a resounding 86-point win over Springvale Districts. The Bombers had 12 individual goal kickers in the match and were led by Ben Evans with three. Skye started the game strongly and built upon its healthy lead during every quarter, and in keeping Springvale goalless for the first half it showed that it is still a defensive powerhouse in the competition. Aaron Harper was named best on ground.

Oakleigh Districts has all but sewn up the minor premiership in Division 2 and a week off come finals time after a comfortable 26-point win over Keysborough. Justin Hill and Dave Velardo combined for nine of the Oaks’ 13 goals and helped them build a 35-point advantage at the final change before holding on for the win. Andrew Howison and Dan Kiellerup were the best for Oakleigh Districts.

Four goals from Adam Connell and a best on ground performance from Sean Walton have helped keep Caulfield in the top five after a 28-point win against Highett. The Bears shot out to a 33 point lead at half time and never looked in doubt, piling on another four goals to three in the third quarter to help seal the win. Tom Brown and James O’Keefe were the best for Highett.

Ruckman-turned-forward James Shirley kicked four goals and helped Murrumbeena overcome a shaky first half to pull off a stirring 48-point victory against Heatherton. Inaccurate kicking hurt the Beena in the first half and they only lead by six points at half time before banging home 11 goals to five in the second half to pull away from the Tonners and get the four points and all but secure a top three finish. Michael Kinsella was the best for Murrumbeena while Matt Jamieson kicked five goals as Heatherton’s best afield.

A powerful second half display has helped Hampton remain in the hunt for a finals berth with a 42-point win over Doveton Eagles. The Eagles took a four-point advantage into half time and looked the better side for much of the first half before the Hammers kicked on in the third quarter to take the lead and finished the game off strongly with five goals in the last quarter. Matt Digby was best on ground for the Hammers while Ross Pinkerton kicked four goals.

Playing at home, Ashwood needed to defeat Moorabbin to ensure the Magpies’ place in the finals, and achieved this surprisingly easily.  However, a 12-goal victory was soured by injuries to key Ashwood players.

Skipper, Paul Wineberg was again in strong form and should have been shooting for his fourth goal after a mark early in the third term.  Unfortunately his knee was injured in the marking contest, and his season appears to be over.  He has kicked 44 goals this year and has featured in the Magpies’ best players on a number of occasions.

Out of a tally of 16 goals against the Kangaroos, five Magpies booted three majors each, but it was Matthew Menzies who was chosen as the winner’s best player.

Endeavour Hills gave its fans hope that it could snatch a finals berth with a solid start against Black Rock.  The Falcons led by a couple of points at the first break.  By three quarter time it was still a close contest, with the Jets 15 points ahead.  Endeavour Hills continued to battle hard, but the Jets won by 15 points.

Simon Taylor booted six goals for the Jets and was named the winner’s best player.

Sandown overcame a sluggish start at home to overpower Dandenong in the second half.  The Cobras booted five goals to none in the third term, heading into the last quarter with a 14-point lead.  Sandown eventually prevailed by 35 points, with Luke Newton and Michael Edwards each contributing three goals to the win.  Steven Ritchie kicked a couple of majors and was named the Cobras’ best.

Mount Waverley sent a message to any of its prospective finals opponents, ruthlessly disposing of South Yarra to win by 144 points.  Ian Taylor was named the Mountain Lions’ best player after contributing four goals, and Patrick Kinsella contributed just as many majors for the winner.  Victory enabled the Mountain Lions to leapfrog the beaten Moorabbin and pinch second spot on the ladder.

10 goals from Trevor March took his season tally to 86 and helped Carrum Patterson Lakes to a 73-point victory over Lyndale.  March’s teammate Joel Dalton also impressed with five majors.  The visiting Pumas showed some spirit in the third term, kicking eight goals to four, but the damage had already been done by half time, at which stage CPL led by 71 points.