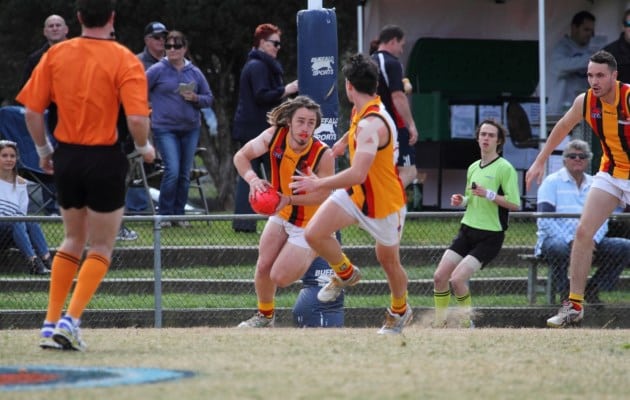 Demon’s denied in a thriller

Bentleigh has done coach Paul Dimattina’s ticker no favours as they played out their third nail-biting finish in as many weeks. Unfortunately they were on the wrong side of the ledger this time, going down by three points to Cheltenham at Jack Barker Oval. The game was a good, old-fashioned scrap for four quarters but the Rosellas managed to take control of the game in the third term with Daniel Vaughan again instrumental. Two late goals to the Demons made the game interesting, but it wasn't enough as the home side held on for a nail-biting win. Jackson Meredith was among the best for the Demons. - Re-live this thriller by listening to the 88.3fm call HERE

Over at Ben Kavanagh Reserve, Mordialloc continued its stunning start to the season, knocking off St Pauls by nine points in another thrilling, albeit low-scoring encounter. The Dogs led for most of the first half before three third-term goals got the Bloods’ noses in front. From there they held the visitors at bay, despite the best efforts of Harley Ambrose. James Keighley and Simon Fragiacomo were the standouts for Mordi.

East Malvern, meanwhile, held off a fast-finishing St Kilda City to claim a 12-point win at Peanut Farm. The Panthers flexed its muscle in the first half and by three quarter time had extended their lead to 40 points. But instead of rolling over, the Saints showed some real fight, attacking with the wind in the final stanza and piling on five goals to drastically reduce the final margin. Alan Purvis was again City’s best, while Matt Fife and Michael Cooke did the damage for East Malvern.

As expected, Dingley cruised to a comfortable nine-goal win over Chelsea Heights at Beazley Reserve. The Heighters, to their credit, fought hard to stay in the contest, with Callum Dodson leading the resistance, but Dingley managed to up the ante and pull away in the second half. Andrew Stock and Dean Francis were the main contributors for the winners, dominating up forward with four goals each.

The final game saw East Brighton dish out a 135-point hiding to Clayton at Hurlingham Reserve. It was simply one-way traffic as the Vampires piled on 9.4 to 0.0 in a devastating opening quarter that had all but decided the result by the first change. Andrew Jansen continued his purple patch with another best-afield performance for the home side while up forward Phil Smith booted five majors. Chris Morrison was one of a select few that could hold their head high for the Clays.

Round five has come and gone and things are starting to heat up in division two.

Keysborough continued their tremendous start to their season with a 27 point victory over Skye. The win was set up by a dominant third quarter for the borough, when they outscored the Bombers six goals to three to take a 31 point lead going into the final term. Keysborough took the foot off the gas a little in the final term but they were able to hold on for the win. Tyson King continued his good form in front of goal with five majors while William Gayfer was named in the best.

Murrumbeena got their second win of the season with a dominating performance against Springvale Districts. The Beena had 11 separate goal scorers in the win, which saw them combine their improving defence with an evenly spread attack to great effectiveness. A strong second quarter, where Murrumbeena kicked seven goals, was the key in the victory as utility Josh Wright dominated around the ground while Sammy Stamos kicked three goals.

In a rematch of last year’s semi-final, Hampton have again got the better of Caulfield, this time to the tune of nine points. The Hammer struggled in the first half as the Bears jumped the gun, applying strong pressure all over the ground, forcing Hampton into costly errors. But they dug deep in the second half to outscore Caulfield nine goals to four, to run away with the victory. Joel Hanlon bounced back to form, kicking four majors.

Highett have continued their good start to the season with their third victory in a row, with a win over Doveton. The Dogs were simply too good for the Eagles as a six goal third quarter did the damage for Highett. Doveton were competitive in the first half but fell away in the decisive term. In a high scoring game for the dogs, they were able to evenly spread the goal kicking around to 11 players, four of which kicked two goals apiece.

Oakleigh Districts have continued their dominating ways with a commanding win over Heatherton at Ross Street Reserve. Oakleigh were never troubled in the game as they quickly ran away to a 40 point lead, after a seven goal opening quarter. It would only get worse for Heatherton as Oakleigh added another five goals in the second half to stretch the margin to 59 points. David Velardo was again accurate in front of goals, kicking seven.

In a round of mostly close matches, South Yarra achieved a major upset, recording a 15-point triumph over Carrum Patterson Lakes. South Yarra led its fellow Lions narrowly at the last change, and got home with four goals to two in the last term. Jordan Cellini led the way with three goals for the winning team, and was named its best player, followed by Zac Maher.

Nothing separated Ashwood and Endeavour Hills entering the final stanza, but in the remainder of the game the Magpies punished the Falcons’ wasteful 2 goals 7 behinds, booting 4 goals 1 behind of their own to win by one straight kick. Jacob Barker and Frank Martinicchio finished with three goals each for the victorious Magpies, and Michael Spencer was named their best player.

Sandown led Moorabbin by three points with a quarter remaining, but the Kangaroos maintained their unbeaten record with a five-point win, with Matthew Johansson again a significant contributor with three goals, and Peter Gerard the winners’ top player.

The clash between Black Rock and Mount Waverley lived up to high expectations. The Mountain Lions were a couple of goals up at quarter time, but trailed by three goals heading into the last term. With Tom Dewar and Tom Dalton sharing the goal kicking honours with four each, the Jets remained unbeaten. The winning margin was 9 points and Brad Meehan was chosen as the Jets’ best.

Hallam was just a goal behind Lyndale at the last change and was in with a big chance to cause an upset. The Pumas proved too strong, slamming through five goals to none during the remainder of the game, to win by 33 points, but the Hawks continue to impress with their competitive spirit. Mohammad Babar was again valuable in front of goal for the winning Pumas, booting five majors, and Veton Rexha was the team’s best player.

When the two bottom sides met, it shaped as a hard fought match. Dandenong had other ideas, handing the Southern Dragons a 58-point loss. The Redlegs celebrated their first win of the season. Their major goal scorer was Chris Arnold with three, and the best player was Cameron Riley.