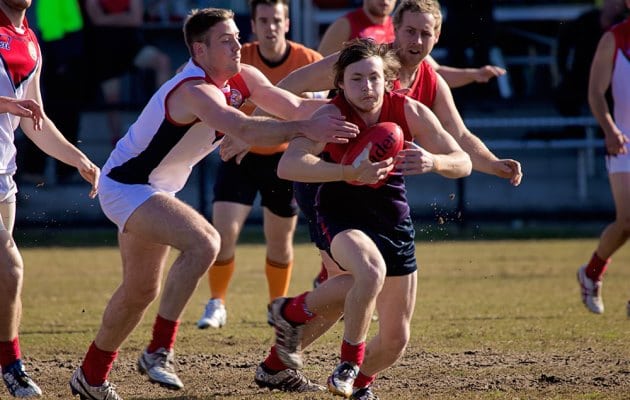 Clash of the Demons in VRGF Match of the Month

The Round 14/15 SFNL Record can be downloaded by clicking HERE. Earlier issues are available via ‘Media’, then ‘SFL Record 2015’.

At first glance, Round 15 appears to be a relatively straightforward one for tipsters, however, season 2015 has thrown us enough curveballs for us to know that we should expect the unexpected.

While both of these teams are out of finals contention, there will be plenty of pride at stake here in the Victorian Responsible Gambling Foundation’s Match of the Month. Despite their ladder positions this should be a cracking contest between two of the youngest sides in the competition. Had close results gone their way earlier in the year, we could well have been talking up Bentleigh’s finals prospects at this stage. Nevertheless, they have still been the better of the two Demons teams this year, so expect them to salute at home.

Cheltenham’s season has gone from bad to worse in recent weeks – injuries have played a large part in their downfall – and after seven consecutive losses they face an East Malvern side intent on securing a spot in the top three. The Panthers were the last side the Rosellas defeated, but there will be no repeat result on Saturday as East Malvern will record a percentage-boosting victory.

Another comfortable victory last week all but assures East Brighton of a free ride into the second week of September. They face the rebuilding St Kilda City this week – a side that has been gallant some weeks and totally uncompetitive in others. Results in their last three matches suggest they have been the latter lately, and a repeat effort on Saturday will result in another complete hammering by a Vampires outfit that are hitting peak form at just the right time. If the Saints can get within five goals, they’ve done well.

Another huge game for the Dogs this week as a win here all but guarantees them a finals berth with winnable games against three of the bottom four sides coming up to close out their home and away season. Clearly one of the standout teams in recent weeks, they are capable of upsetting the ladder-leading Dingoes on their home patch, however the loss of Ken Hall further compounds their injury woes. Last week was the fourth time this season Dingley have booted 20 or more behinds in a match, so this is one area they need to improve before September. But if they can convert their chances on Saturday you can back them in to win.

The enormity of this contest in the context of Clayton’s season cannot be overstated. Simply put, as well as relying on other results, they need to win their remaining four matches to be any chance to play finals given St Pauls are a game and 30% ahead of them in fifth spot. The third-placed Bloods will provide very stiff opposition given the will be keen to atone for their underwhelming performance last Saturday – their first loss in six weeks. Hard to go past Mordialloc here.

As the finals draw closer, several teams continue to battle for positions in the top five.

Springvale are the unlucky club that will run into a determined Keysborough outfit that will be looking to put in an inspired performance after the loss of club great Corey Wilkinson. The Burra will also have their sights set on top spot and a big win against Springvale will help bridge the percentage gap.

After last week’s disappointing loss to Hampton, Caulfield need a win to stay in touch with the top five. Unfortunately the Bears run into a Skye team that fell out of the top three and need a win to stay within reach of Murrumbeena. This should be an exciting game of football with finals on the line for both sides.

The Beena will be full of confidence after moving into the top three for the first time this season and have launched themselves into premiership contention. Highett are still mathematically able to make the finals and an upset win over Murrumbeena will see it move a step closer to that goal. In saying that, Murrumbeena are a strong side at home and should win this game.

Back to the form it was when playing finals last year, Hampton are back in business and will look to hold on to fifth spot on the ladder when Heatherton come to visit. The Tonners were disappointing against Oakleigh last week and will look for an improved performance against the Hammers. With a chance to put some more distance between themselves and Caulfield on the line, expect Hampton to win this one.

Doveton has been one of the most improved teams in the second half of the season but it runs into an Oakleigh side that has rarely missed a beat so far this year. The Oaks possess a lot of weapons in attack and are well complimented with one of the best midfields in division two. The Eagles will have their work cut out for them in this one with the Oaks looking to wrap up top spot.

The Round 15 win by Endeavour Hills has added spice to Round 16 with a couple of games now crucial in determining who claims the last finals spot.

Endeavour Hills has an opportunity to test itself against one of the division’s top teams when it hosts the in-form Moorabbin. A win in this match would be a huge boost to the Falcons’ confidence and strengthen their belief that they can make the finals and have a real impact once there. Last time the sides met, the Kangaroos won by 46 points. This time it should be much closer, but Moorabbin will get the job done.

A loss against Carrum Patterson Lakes would see Ashwood relying on luck to retain its grip on fifth position. Despite playing at home, the Magpies start as underdogs and there is no reason to tip against the third-placed CPL, which should win by at least a few goals.

With a win in its last start and playing on its own turf, Hallam should start its clash with the top-placed Black Rock full of enthusiasm and energy. Perhaps this will help the Hawks stick with the Jets for a while, but Black Rock will be too powerful and it will be a surprise if it doesn’t win by a substantial margin.

Mount Waverley will feel that a chance slipped through its fingers in a narrow Round 15 loss and will not be in a hospitable mood when it hosts Dandenong. The Redlegs have the benefit of a bye to freshen them up and should have gained some confidence from a valiant effort in their most recent game, despite a narrow loss, but the Mountain Lions will win comfortably.

These two sides will this week play off for the inaugural Andrews/Chambers Cup, which is named in honour of two legends who served both clubs with distinction – Roger Andrews and the late Steven ‘Biff’ Chambers. There is no hope of finals action for either side, but only one game separates home team Lyndale and the visiting Sandown. It should be a good contest, but is hazardous for tipsters. It is with minimal confidence that this tipster leans towards a narrow win for the Pumas, which would ensure they finish higher on the ladder than the Cobras.

South Yarra players get a chance to rest their weary bodies, having this week’s bye.