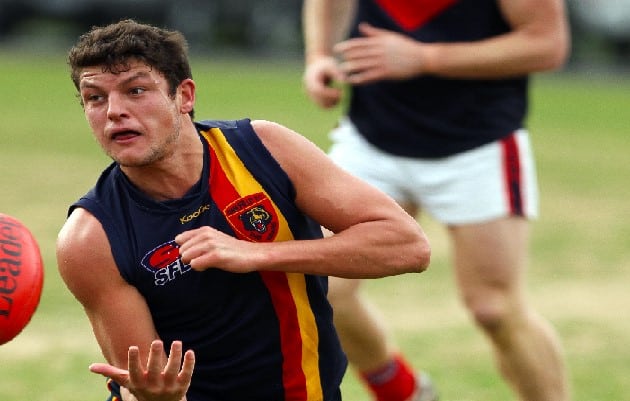 Dingley has claimed the 2014 minor premiership after a comprehensive 54-point drubbing of East Brighton at Souter Oval. After a hard-fought arm wrestle in the first term, the Dingoes took control of the match after the first change and never looked back, keeping the visitors to just three goals for the day. Although Adam Stock was the clear standout for Dingley, Jack Williams and Jackson Peet were also handy contributors. Forward Mark Jamieson provided some spark in attack in what was a tough day at the office for the Vampires.

East Malvern will be having their Mad Monday in a fortnight after St Pauls knocked them out of the finals race. The Doggies were always in control and their six-goal-to-one final term saw them home by 54 points in their clash at Dunlop Reserve. Their comprehensive victory further underlines their premiership credentials and Dogs’ match-winner Brendan Dawes looms as one to watch come September on the back of his six-goal, best afield performance. Tremaine Tohiariki worked hard for the Panthers.

Cheltenham and Bentleigh played out a ripper at Bentleigh Reserve, with the Rosellas coming from behind to win by 19 points. The visitors booted six unanswered goals in the second term to turn around their quarter time deficit. A great contest in the second half, Cheltenham stepped up when the game was on the line with Pat Bolger and Daniel Vaughan again among the standouts. Dale Hynes and Liam Hogton-Hewish were the Demons’ best.

St Kilda City claimed their fifth win of the year, upsetting imminent finalist Chelsea Heights at Peanut Farm. The Saints were red-hot from the start, keeping the Heighters to just one goal in the first half to set up a handy lead at the long break. Lachlan Dobson sparked Chelsea Heights into action in the second half, but it wasn’t enough as the home side ran out 34-point winners. Paul Kennelly and Daniel Ella were prolific ball-winners for City.

The final match of the round saw Clayton snap an eight-game losing streak with a convincing 62-point drubbing of Heatherton at Meade Reserve. A blistering opening term saw the Clays lead by over 10 goals at the first change, and from there it was just a case of how far Clayton. Heatherton fought back with six goals in the last quarter to reduce the final deficit, with coach Clint Einseidel kicking four for the match. But it was Chris Morrison who stole the show with seven majors for the winners.

In the game of the round, Caulfield moved into 3rd spot on the ladder and secured a spot in the finals with a crucial win against Hampton. After a slow start, the Bears were able to kick 6 second quarter goals to lead by 5 points at halftime. Caulfield continued to apply pressure in the second, restricting Hampton to just 4 goals in the second half. Jake Buggy had one of his best games for the season kicking 2 goals.

Mordialloc continued to show why they are the flag favourites heading into the finals with a resounding win over Murrumbeena. The Bloods were deadly in front goal in the second half kicking 12 goals to 6 to run over the Beena who tried valiantly but ultimately were unable to keep up with the ladder leaders. Chris Brooking had one of his better games for the season for the Bloods.

Doveton showed just how good they can be on their day with a commanding performance against Springvale. Doveton have been competitive all season without winning games but after a slow start, the Eagles dominated every aspect of the game. After trailing by 9 points at quarter time, the Eagles went on to kick 14 goals to 4 in a dominating performance, to win by 58 points. Corrie Wilson was best on ground kicking 3 goals.

Highett put in their best offensive performance of the season when they defeated Moorabbin in round 16. After struggling to pull away from a resurgent Moorabbin side in the first half, the dogs turned it on in the second half kicking 14 goals to 7. The win was enough to put them back into 5th spot on the ladder. Of the 10 different goal kickers for Highett, Ben Williamson and Yianni Pasialis were among the best with 4 goals each.

Skye showed again why they are the best defensive team in Divison 2 with a restricting performance against Oakleigh Districts. They say bad kicking is bad football and Oakleigh certainly kicked themselves out of the game early on. The relentless pressure applied by the Bombers kept Oakleigh from quickly moving the ball up the ground while at the other end, the pressure acts from the Skye forwards were able to provide several scoring opportunities for the Bombers as they ran out 28 point victors. Aaron Pacey was the best for Skye.

At Fritsch Holzer Park, Dandenong had one of its best performances for the season. David Barrie led the way with five goals as the Redlegs beat South Yarra by 29 points. Too often this season Dandenong has been unable to maintain a consistent level of effort throughout a game, and winning every quarter on this occasion was commendable. Chris Arnold and Brodie O’Loughlin were the Redlegs’ best players.

Lyndale played at home, and it was expected to be a close tussle with the visiting Black Rock. The Pumas issued a strong statement to other premiership aspirants with a commanding 10-goal win over the Jets. The ever-reliable Trevor Kumetaitis added four goals to his tally, which now sits at 47 for the season. Ordell Buntine was named the best for the Pumas, as he was last week, and Jared Henshaw was also a noteworthy contributor for the winners.

Sandown gave its home fans plenty of reason to cheer in a game against Hallam. The only disappointment for the Cobras was the fact that they fell a couple of points short of scoring 200 for the game. None-the-less, a 183-point win was a tidy day at the office. Best-on-ground Jason Toan had a shootout with his teammate Clint Sheedy, and it finished seven goals all. Frank Martinicchio joined the party with five of his own.

Home team Endeavour Hills tumbled to second last on the ladder after a spanking from Mount Waverley. The Mountain Lions had 46 scoring shots to 11, recording a 130-point win. Champion spearhead James Gough added 11 more goals to his season tally, setting up the prospect of bringing up the ton soon.

Carrum Patterson Lakes hosted the inconsistent Ashwood. Doug Watterson put through four goals for the Lions. Their best player in a 59-point win was Andrew McCormack, who has spent most of the season in the under 19s. Regular contributor Joel Dalton was next best for the winners and kicked three majors.

Bentleigh have edged one step closer to a perfect season, thanks to their 27 point win over Cheltenham last weekend. The Rosellas were goalless at half time, but fought back in admirable fashion. The Dees dominated the last quarter but were inaccurate, kicking 2.10. Spencer Daly continued his fantastic season with another best on ground performance.

The closest match of the round took place at Peterson Street Reserve, where Hampton just fell short against finals-bound St Pauls. The Hammers led by 11 at half time, but five Doggies’ goals to none in the ‘premiership quarter’ proved the turning point. The Hammers came again, but lost by 16 points. Zachary Spencer was the difference up forward with 3 majors.

A massive last quarter was the deciding factor between Carrum Patterson Lakes and Chelsea Heights. CPL led by only two points at the final change but proceeded to kick seven goals to none, blowing the Heighters out of the water. The final margin was a barely believable 44 points. James Grant put in a valiant 4 quarter effort for the Heighters.

Clayton looked a million bucks on the weekend and in the process humiliated Skye, a team they may meet in finals. The normally high-scoring Bombers kicked only two goals for the match, whereas the Clays’ Juy Capp, Joel Rigoni and Mason Lambert combined for ten goals. 81 points was the final difference and will give the Clays a nice confidence boost heading towards the finals.

It was a similar scoreline in Dingley v Highett, with the Dingoes getting up by 116 points. The Dogs were never in the contest, done by 55 points at quarter time. Vince Arena continued his good form with another five goals.

Any hopes that Sandown had of making the finals were dashed when they were brushed aside by a fast-finishing Hallam. Despite being several positions below the Cobras, the Hawks showed they were superior when push came to shove in the last quarter: They kicked the last eight goals to win by 51 points.

In another upset, second placed Mount Waverley were smashed by Endeavour Hills to the tune of 76 points. In what should prove as a reality check to the Mountain Lions, the Falcons guaranteed their finals spot, and could finish as high as second now.

Skye will play finals and Clayton will not. However, Skye played like a team destined for a mid-table finish on the weekend. The Bombers were slow out of the blocks, and when they finally responded (bringing the margin to two points), the Clays kicked away again. They eventually won the clash by 21 points thanks to Steven Sullivan’s four majors.

A brilliant second half was good enough for Black Rock to get the points over Moorabbin. The Roos led by four points at the major change, but kicked only one goal thereafter; the Jets piled on seven. The final margin was 33 points in Black Rock’s favour.

Elsewhere, Dingley had a big win over South Yarra by 117 points to maintain top spot, Cerberus smashed Dandenong by 173 to claim the ‘Bev White Cup’ and Cheltenham beat Doveton by 22points to ensure the Eagles remain winless.