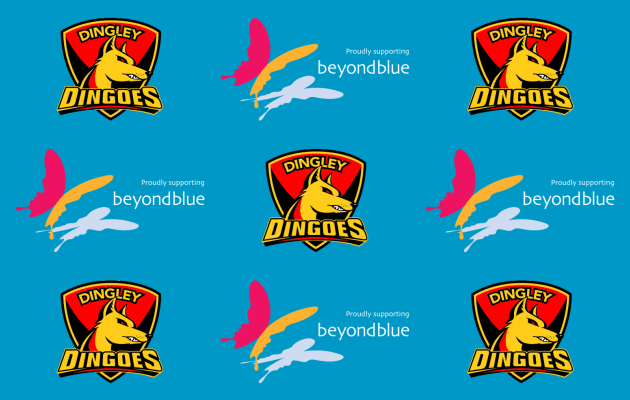 On the surface, Daniel Bolger was a supremely talented footballer with the world at his feet.

After landing at Souter Oval at the start of the 2014 season, Bolger quickly established himself as an integral part of the Dingoes’ powerful line up.

That tattooed ball-winner earned selection in the SFNL interleague side in early 2015, and by season’s end he had a premiership medallion draped around his neck.

But in reality things were nowhere near as rosy as they seemed.

Bolger has been driven to the depths of despair by his depression, a condition he had kept a secret from all bar a handful of his closest friends and family members until recently.

The 24-year-old made the decision earlier this year to step away from football indefinitely and concentrate on returning to good health.

Bolger has so far made giant strides forward in his recovery and has bravely opened up about his long-running battle with the insidious illness in the lead-up to this weekend’s SFNL beyondblue Round.

“The first year at Dingley I sort of had things under control for the most part of the year, but then the second half of that first year I started to have some issues that I kept (hidden),” Bolger revealed.

“From an outside perspective it would look like I am going good. I’ve got a job, playing footy, staying out of trouble, but I was probably having the worst time of my life.

“It’s a constant feeling of being numb… you’re just thinking negative thoughts constantly about yourself.

“You’re not yourself, and it’s hard to enjoy the things you used to enjoy. It’s hard to socialise with people… You get anxious in social situations.

“I was always sort of a pretty ‘up and about’ sort of person, and having this hit me affected my whole personality.

“It was just s*** because I didn’t know really what was going on and I tried to hide it from everyone.”

Bolger’s mental health issues first surfaced in his teens, however, he was initially able to manage the onset of his depression, a far cry from the constant depressive state he has descended into in recent years.

But it nevertheless stalled his promising junior football career.

However, as his mental condition deteriorated, he went off the rails, dropping out of footy and abusing drugs and alcohol before spending time in prison and rehabilitation centres for a number of months.

While Bolger has since made significant efforts to get his life back on track following his incarceration, his experiences in his teenage years have no doubt exacerbated his mental health issues.

Fast forward a few years and Bolger is back playing football for Dingley’s senior team while also managing his worsening condition.

And his sparkling performances on the field alone were not able to mask his fragile emotional state. Frequently he would break down into tears in the rooms following the final siren, something Bolger tried desperately to hide from his teammates.

“I was having episodes during games where I was just basically having nervous breakdowns in the rooms,” Bolger admitted.

“At the start I was really embarrassed about it so I used to go into the toilet and hide it from everyone.

“And it was a matter of ‘s***, I’m going to have to quit (footy)’ because I was sort of embarrassed about people seeing me and talking about it.”

Bolger’s public breakdowns would have been obvious to most, but rather than continue to hide them, he decided to open up to his teammates about his struggles half way through the 2015 season and was surprised by the level of support he received.

And he credits the support of his teammates as one of the biggest influences in his recovery, despite describing his public admission as a “confronting” experience.

“Everyone was really supportive and (I got) a lot of text messages and things on Facebook and stuff like that,” Bolger recalled.

“The support I got throughout the rest of the year was really good because I would be playing and… it didn’t necessarily mean things got better, but I felt safe there.

“If I was having these, I guess if you want to call it episodes, I felt supported, rather than having to hide it, which was a big weight off my shoulders.

“That was the number one thing that sort of helped me continue to play for the rest of the year rather than quit altogether.”

And although it was a special moment in his career, Bolger admitted that he didn’t get to enjoy it as much as his teammates due to his mental state.

In the months that followed, Bolger’s condition worsened, in part due to a serious concussion suffered in a pre-season training session, his third concussion for the year.

A neuropsychologist told him he risked permanent brain damage if he received similar blows to the head, a clear and ever-present danger in a contact sport such as footy, which led Bolger to make the difficult decision to give away the game he loves.

Without the tight-knit support structure of the footy club to rely on, Bolger took a turn for the worse. He reached absolute rock bottom just after Christmas before he checked into a rehabilitation centre for three weeks to get the help he desperately needed.

Bolger has also been in regular contact with Dingley’s senior coach, Shane Morwood, and together they started working to put things in place to aid his recovery with the help of a psychologist.

Bolger credits Morwood’s tremendous support as vital to his recovery, particularly during his lowest ebb.

“To this day I speak to (Shane) quite regularly and he’s really stood up as far as helping me off the field,” Bolger said.

“I can say that for the rest of my life, he will always be someone I speak to on a regular basis about things.

“Shane… plays an absolutely massive part, especially in that Christmas time when I wasn’t even playing footy. He went above and beyond to help me out and show support which was the ultimate factor in helping me (get better).”

In the months since Christmas, Bolger has made significant progress in his battle with his demons and is now in a much better place emotionally.

Coincidentally, Bolger spent some time in the same rehab centre during his troubled teenage years, and is keen to help young people that are going through similar issues to the ones he himself has dealt with.

“Things have been going really good. As things got better I got this job and I’ve been working there for nearly four months now,” Bolger said.

“Since I started that work it’s really helped me a lot.

“Last year I thought this is what it is, but also I made a decision that this wouldn’t be who I am. I’m not just going to have depression my whole life. I was gonna do everything to make it better.

“(I’m) enjoying life and enjoying my job and just looking forward to the future, honestly.”

With Bolger now well on the way to recovery, he shares his story with SFNL Media in the hope that it can inspire others in similar positions to take action and get the help they need.

In particular, Bolger is keen to impart perhaps the most important lesson that he has learned throughout his struggles with depression – no matter how dire your situation may seem, things can always improve.

“Thing will get better; it just takes time. You’ve just got to keep pushing forward and keep ticking as many boxes as you can and it will all come together,” Bolger said.

“There’s not a quick solution… But you’ve just got to keep at it, working on little things and taking one step at a time because eventually you will be able to be in control of your own life and start to enjoy each day.

“This time last year I would never have thought I would be doing the kind of work I’m doing, or even talking to you about this article, basically enjoying life.

“There is always light at the end of the tunnel.” Dan Bolger was a star with Dingley before depression forced him to give the game away.[/caption]