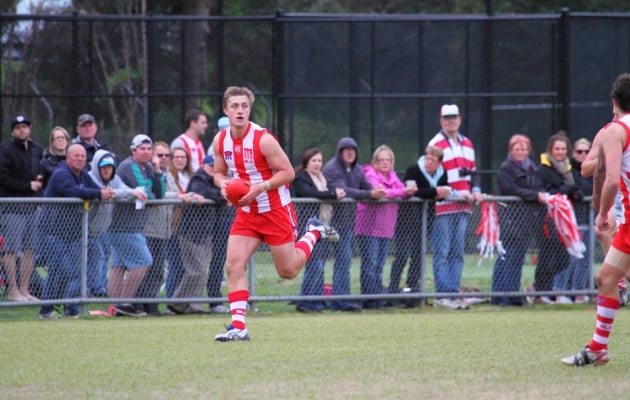 Mordialloc claimed a stunning victory at Ben Kavanagh Reserve on ANZAC Day, upsetting the fancied Dingley by just five points. Little separated the two sides all afternoon, but when the Dingoes booted three goals in as many minutes to extend their lead to 13 points midway through the final term they looked the goods. Not to be denied, the Bloods hit back with three of their own in time on to pull off the remarkable heist. Big Beau Turner was the standout for Mordialloc while Jackson Peet was also serviceable for the Dingoes.

East Malvern also remains undefeated after eclipsing a plucky Clayton outfit at Meade Reserve. Inaccuracy in front of goal nearly proved disastrous for the Panthers as the Clays rallied in the third term, posting five majors to take a slender lead into the last quarter. But the efforts of Michael Cooke and Ryan Fitzgerald saw their side pile on six final-term goals to get home by 30 points. Chris Lee was Clayton’s best.

Bentleigh claimed its first win of the year, knocking off St Kilda City by the barest of margins in a thriller at Peanut Farm. In one of the games of the year, City overcame an early deficit to claw their way back into the contest and snatch a narrow lead at the final change. But with James Robertson and third-gamer Saf Balic leading the charge the Demons rose to the occasion, booting a goal in the final minute to record a memorable victory. Aaron Purvis and ex-Clayton young gun Juy Capp were the stars for the home side.

Over at Hurlingham Reserve East Brighton recorded a 16-point win over rivals St Pauls. The Vampires held the Doggies at arm’s length all afternoon in what was a hard-fought and low-scoring encounter. Andrew Luxa and Andrew Jansen were the main contributors for East Brighton, while the usual suspects in Jarryd Allan and Liam Wilson were again leading the way for St Pauls.

In Sunday’s game Cheltenham withstood a late charge from Chelsea Heights to run out 25-point winners in blustery conditions at Jack Barker Oval. The Rosellas’ opened up a comfortable lead kicking with the breeze in the first term and from there were never really challenged. The Heighters simply couldn’t contain Cheltenham’s big boys in Chris Graham and Pat Nicholls, the latter slotting a bag of five. Former Ashwood midfielder Jarryd Uren was among the standouts for Chelsea Heights.

Round three has come and gone and it left us with a lot of questions after a few upset wins.
Keysborough sits alone on top of the ladder as the only undefeated team after their come from behind victory against Hampton. In arguably their toughest match since entering the league, the borough started poorly as the Hammers jumped the gun to lead by nine points at half time. But Keysborough bounced back to kick four goals to one in the second to hold on for a 15 point victory. Tyson King was among the best on ground, kicking multiple goals in each half on his way to five.

It’s taken him a little while but experienced Murrumbeena coach Stevie Wright has Murrumbeena showing just how good they can be, as they demolished the upstart Bears by 42 points. The Beena have been good defensively this season but it was their forward attacking that did the early damage as they kicked nine first half goals. They slowed down a bit in the second half but their defensive pressure was the best it’s been all season as they increased the margin in the second half. Mitch Walder was one of the best for Murrumbeena with four goals.

Skye were back to their menacing best as they moved to second on the ladder after defeating Doveton by 69 points. Despite a slow start from the Bombers, they managed to open up a 12 point gap at quarter time. But after that they were ruthless as they seemingly dismantled the Eagles, kicking 14 goals to four in the remaining three quarters. Ryan McConville and Tim Barr combined for 10 goals while Adam Beness had a day out in the midfield.

Highett got the better of Oakleigh Districts, getting away to a good start in their 14 point victory at Princess Highway Reserve. The Dogs led at every change as Oakleigh struggled to gain any form on control in the match. Highett had ball winners all over the ground and spread the goal kicking load around as eight different players put the ball through the big sticks. Among those, Tom Brown and Pat Singh were the best on ground for Highett.

In perhaps the upset of the round, Heatherton got their first win of the season when they defeated Springvale Districts to the tune of 19 points. The Tonners were dominant early, kicking five goals to none in the opening quarter, making it very hard for Springvale to get back into the game. They reduced the margin to 15 points by halftime but Heatherton struck back in the third quarter to open up a 21 point lead going into the final term. The Tonners were outscored but held on for the win. In his first senior game for the club, Matt Van Schajik was best on ground with five goals.

After the Anzac round, three teams remain undefeated, but it is Black Rock that sent shockwaves through division 3 with a crushing display at home. The Southern Dragons must have wished it was not the radio game of the day as the Jets pulverised them by 184 points. The only positive for the vanquished team was the solitary goal it scored in the first quarter. The Jets managed 28 majors, kicked by 15 players. Sam Maitland was the victor’s best.

Playing away from home proved no obstacle for Carrum Patterson Lakes as it achieved a 39-point victory over Endeavour Hills. The Lions only enjoyed an eight-point advantage heading into the last term, but piled on nine goals to four to get the job done in style. Their biggest star was James Dent with nine goals, with five from the ever-reliable Trevor March.

Chris Meyers threaded five through the big sticks for Ashwood, one more goal than the Magpies’ opponent Sandown could manage for the day. The Cobras went down by 61 points and will be looking forward to Brendan Fevola pulling on the boots for them next week. The Magpies’ Brett Figas was named their top player.

Tom Hanney led the way as South Yarra’s best as the Lions brought up their first win for the season, proving too classy for Dandenong at Greaves Reserve. The Redlegs battled hard and kept it to five goals each in the second half, but the damage was done by the long break and the Lions finished 49-point winners.

Moorabbin continued its smooth transition to this division with a 20-point victory over a determined Hallam at Widdop Crescent. Matthew Johansson and Trent Davey continued to impress for the Kangaroos with five goals each.