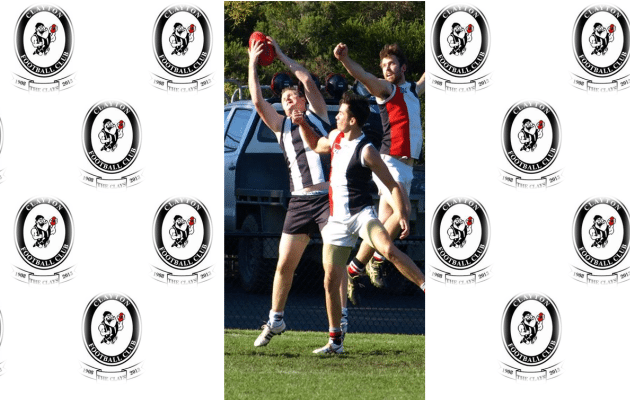 Tweet
Corey Pearce has enjoyed the high’s, and in recent times, the lows throughout his 300 games for his beloved Clayton Football Club, 326 to be precise.

Those 326 games consist of 26 for the EFL and now 300 games for the Southern Football Netball League which is a great achievement and shows Corey’s loyalty and passion for the club. In his time at Clayton Corey has played in 2 Division One flags (2001 & 2006) and 1 Division Two flag (2010), this was on the back of relegation in 2009. Corey has also kicked in excess of 550 goals, played representative football for the league and was named in the Clayton team of the decade (2001-2010) as the Centre Half Forward.

Congratulations Corey on your 300 games with the SFNL and hopefully there is a few more to come!

Match of the round broadcast

Division 1 – Round 8 Preview
With Good Will Hunter

Last week merely validated what we already knew – Division One is a very even competition in 2015. And with five big games scheduled for Round 8, expect more close encounters.

East Malvern V Dingley (Dunlop Reserve)
A massive clash between two of the standout teams in the competition. The Panthers have had their injury concerns in recent weeks and come into this game on the back of a heart-breaking loss to the Rosellas. The Dingoes, meanwhile, have gone from strength to strength, and are unbeaten since their narrow defeat to Mordialloc on Anzac Day. This will be a tremendous contest, but on form I’d expect the ladder leaders to get the points.

East Brighton V Mordialloc (Hurlingham Park)
This will be another belter between two of the top four sides. East Brighton have won six matches on the trot since their loss in the opening round, but showed against City that they are susceptible if they have an off day. Mordialloc were devastating in the final term last week and with that form would be a big chance here. But it’s hard to see the Vampires having two bad games in a row and I reckon they’ll be too good.

St Pauls V Bentleigh (McKinnon Reserve)
It appears that St Pauls have well and truly dropped off the pace this year after several years as one of the competition’s benchmarks. At 2-5, they will now be pushing the proverbial uphill to make finals. Conversely, I was impressed with the way the Demons fought their way back into the contest last week and if they can produce a repeat effort I think they will beat the Doggies on their own turf.

Clayton V Cheltenham (Meade Reserve)
Clayton reminds me of Collingwood at the moment insofar as they haven’t beaten any side in the top five. The Rosellas’, however, are coming off an unexpected win over a premiership contender. With their confidence now sky-high, I’m tipping Cheltenham to finally break their pattern of alternating wins and losses and comfortably account for the Clays.

St Kilda City V Chelsea Heights (Peanut Farm)
As the losses continue to mount, this game looms as a battle that could determine who avoids relegation at the end of the year. St Kilda City have played some good footy against the better teams, while the Heighters’ percentage of just 47.21 is evidence of the regular drubbings they’ve received this year. Both sides are coming off narrow losses and this could be another thriller, but St Kilda City will get the chocolates.

Division 2 – Round 8 Preview
With Jason Barbin

The game of the season awaits us in round eight, as 1v2 go head to head for premiership favouritism.

Oakleigh District vs Keysborough (Princess Highway Reserve)
The top two teams on the ladder go head to head in this titanic clash. Keysborough have rarely looked troubled so far this season and receive its biggest test for the season against an Oakleigh side, that I feel still have another gear to go into. It will be a battle of the key forwards as Tyson King and David Velardo square off for bragging rights and the all-important four points. Tough to pick but I do like Oakleigh at home.
Oakleigh Districts by 7 points

Doveton Eagles vs Hampton (Power Reserve)
Doveton will be full of confidence after winning its first game of the season and under sole coach Daniel Macklin, the team is headed in the right direction. Hampton would’ve felt like they deserved a win against Skye last week but came up empty. They will go out there to prove that last year wasn’t a fluke and should get the points.
Hampton by 27 points

Heatherton vs Murrumbeena (Ross Street Reserve)
The Tonners have improved in recent weeks and were prime position to get their second win of the season against Doveton. But they ultimately came away with nothing and have a tough clash against a Murrumbeena side who, despite its loss to Oakleigh, are one of the improving sides in division two. Should be a good game but I like the Beena for the points.
Murrumbeena by 22 points

Springvale Districts vs Skye (Springvale Reserve)
Springy desperately need a win against Skye this week or they will struggle to get back to the finals. Skye have been severely undermanned the last few weeks but have managed to get the results they need. They will rely heavily on coach Ben Walker and Adam Beness to drive them forward while captain Aaron Pacey is on the sidelines. Skye should have enough depth to get the win.
Skye by 17 points

Highett vs Caulfield (Turner Road Reserve)
Both of these sides look to be in the battle for the final two positions in the top five and the winner of this game will have a big advantage in that race. Caulfield have been in good form so far this season and have covered the lack of goals from full forward Adam Connell, who is still recovering from preseason injury. Highett pushed Keysborough for a half this week and have the talent to beat the Bears this week. This game should be close.
Highett by 11 points

Division 3 – Round 8 Preview
With Andrew Paloczi

Round 8 features a long-awaited clash. Mayfield Park will play host to a fierce contest when Carrum Patterson Lakes comes to town to challenge Mount Waverley. The Mountain Lions won two entertaining home and away encounters against CPL last year, but the Lions won a close semi final battle. This one is tough to call, but CPL is the tip today. Whatever the result, it will be an opportunity to appreciate the skills of these two teams and a chance to prove their premiership credentials.

Ladder leader and premiership favourite, Black Rock is again playing at its home fortress and will be too strong for Lyndale.

Moorabbin will bounce back from its first loss for the season when it visits Greaves Reserve, and the Kangaroos should comfortably account for Dandenong.

A couple of consecutive wins offers real encouragement for Hallam, and under the lights on Saturday night the Hawks should have plenty of self belief going into the contest against an inconsistent Endeavour Hills. The Falcons should win, but a close match seems likely.

Sandown is back at Edinburgh Reserve and the Cobras’ opponent is South Yarra. If the Lions can improve their kicking for goal this week, they will be too good.

It would be wonderful to tip the Southern Dragons this week after a couple of determined efforts recently, but Ashwood will have too much class.