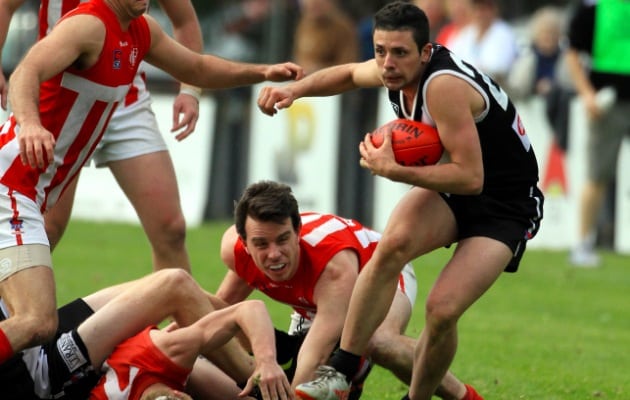 When the AFL got serious about ‘AFL 9s’, so too did the SFL. Realising the desire of many players to continue on throughout the summer, the league went about putting together what quickly became the largest AFL 9s competition in Victoria. The game continues to grow and is once again being played over the summer months on Tuesday and Thursday evenings at Moorabbin Reserve.

9s is a terrific social game and includes men and women of all ages with varying football experience – although someone should have reminded the Umpires team of the ‘social’ aspect the night their match was abandoned due to one lively Umpire starting a physical altercation (the only 9s game we’ve ever had to call off mid-match)!

The SFL facilitated a Leadership Mentoring Program this year, which was developed to provide valuable leadership and communication knowledge and skills. Additionally, it provided an opportunity for participants to experience what it is like to be a leader within a mainstream sporting club.

The program trained and equipped participants with the basics of leadership, communication and other skills over seven separate training sessions. These sessions involved group work/discussions, and presentations by a variety of speakers who possessed expertise in their chosen fields.

The Bennett Medal acknowledges the contribution made to community football by John Bennett. John Bennett was arguably the best player to grace the SFL. He was classy, strong, skilful and a true leader. Whether playing out of the goal square or in the thick of the action, John stood out as a powerhouse. He combined coaching and playing with East Brighton in the SFL from 1992-99 and won the club’s Best and Fairest in its 1993 Division 1 premiership year. After two years away from football, Bennett returned as coach of Heatherton, leading the club to two Division 2 premierships in 2006 and 2009 before retiring from the role after the 2010 season. John transformed Heatherton and is a hero to the club for doing so.

The Flack Medal acknowledges the contribution made to community football by Ryan Flack. Ryan Flack is known as ‘the players’ player’, a fierce competitor who never flinches on the battlefield. With his raking kick, Ryan is always dangerous, whether playing in the midfield or up forward. He coached Chelsea Heights to Division 1 grand finals in 2009 and 2010 and won the Ellis Medal in 2010. Ryan stood aside from the coaching role following the 2011 season after seven years at the helm. He suffered a neck injury in 2011, but fought back to play a part in another Heighters grand final side in 2012.

The themed rounds provided the league with the opportunity to acknowledge groups within the SFL and the contribution they make to the game. Themed rounds in 2013 included:

Having belted Dingley from pillar-to-post in the Qualifying Final and in the process notching up its 13th win in succession, East Brighton was understandably firming as a genuine contender to a St Pauls outfit that had looked almost untouchable earlier in the year.

Coming off the break, St Pauls looked rusty early, whilst East Brighton dominated the play without capitalizing, and St Pauls took a 9 point lead into the quarter time break, which it extended to 17 points by half time.

From half time onwards, East Brighton began to claw its way back into the game. Lead by speedy defender Tait Sabec, who dominated the second half, the Vampires fought back to be within 9 points at 3 quarter time.

The fourth quarter was an arm wrestle, and the Dogs’ legs began to tire as East Brighton forward Dean Francis kicked the only two goals of the quarter (including a stunner from the boundary) to lift East Brighton to a 1 point victory, and book its place in its third consecutive Division 1 Senior Grand Final.

At the SFL, we tend to punch above our weight in many areas. The SFL facebook page is one such area, with the league enjoying a very large following. Never was this more evident than when a look-alike contest saw a guy wearing a mullet and dressed as Ivan Maric attract more than 500 likes! The winner took out the prize of an ‘inner-sanctum’ experience with the Richmond Football Club thanks to KooGa, which included tickets to a game, as well as access to the Richmond rooms and coaching staff prior to the match.

Let’s face it, the kid can play. Lining up against his former junior club for the first time, Chelsea Heights’ Fry wreaked havoc on the forward line, kicking a haul that almost matched his 18-goal effort of last season. Performances such as this later saw Fry join other Chelsea Heights Under 19s players (including fellow gun-forward Erish Uthayakumar) in the forward line for the Heighters’ senior team.

The centrepiece of Heatherton Football Club’s 100th year came this season when it hosted Highett at the Ross St Oval. The centenary match also served as a fundraiser for former player Rick Crowe, who became a quadriplegic at the start of the year.

Crowe’s great mates and former junior football teammates David Neitz and John Georgiou also turned out for Heatherton. Neitz said it was important to support Crowe, with whom he went to primary and high school and played junior football at Parkmore. Crowe was injured in a jumping-castle mishap early in the year.

“It was a shocking life-changing incident for him,” Neitz said. “Such a simple thing as jumping around in a jumping castle has had a huge affect on him. But he’s been phenomenal in his attitude towards getting the most out of everything he’s got. He’s inspiring the way he’s approaching his challenges.”

When the facilities manager of St Kilda Football Club came to the SFL office to see if we knew who had dumped their hard-rubbish collection in the staff car park, he was probably justified. The caravan that the CEO bought raised the eyebrows of anyone who saw it. Fast-forward three short weeks and the SFL team had gone all ‘The Block’  on that caravan, and it looked a million dollars. Well, maybe not a million dollars, but a lot better than it looked previously! The caravan gave a great commentary position for the SFL radio team throughout the 2013 season.

SFL radio identities Chino and Jules kicked off SFLTV in the first week of the finals, and featured guests from the competing clubs right throughout the four week period. SFLTV will be back in 2014 in time for Round 1 of the home and away season, and promises to be bigger and better than ever.

The SFL launched its new website in May this year, and it was immediately well received. The new-look website greatly improved the user-experience, and the increased functionality allowed for additional content that the old website was not able to accommodate.

For the first time the SFL held a Women’s Breakfast this season to celebrate the contribution women have made (and continue to make) to the local SFL game. With a packed room, it was a terrific celebration and acknowledgement of the often unheralded work put in by club volunteers toward the football and netball programs respectively.

Oakleigh District got the early jump on Mordialloc in the Division 2 Senior Preliminary Final, kicking three goals to zero in the opening quarter and taking a 16 point lead into the quarter time break.

Mordialloc gradually began to regain some control in the second quarter with goals to Cook and Ravenall, and began to limit the output of Daniel Verlado who had booted four early goals, but still went into the half time break trailing by 9 points.

In a fiery second half, Mordialloc gained the ascendancy and took a 7 point lead into the final quarter, before a classic arm wrestle ensued in the fourth quarter. With the irrepressible forwards of Oakleigh District quietened, Mordiallioc stole the game to come away with a nail-biting 1 point win.

Highett had a season to forget, but St Pauls forward Luke James inflicted one parting blow in the final home and away round, booting 16 of his club’s 32 goals.

In a dominant display, no opponent was able to reduce the impact of the crafty forward, who went into the finals series in the best form possible.

"SHE'S been a good old ride, but it's got to stop somewhere,'' Mick Reid said in 2009 as he reflected on his many games for Dandenong Football Club. "It's time to sit back and watch the younger blokes.''

He was speaking a few days before what he was calling his last game for the club. When he came off the ground there were three cold beers waiting for him. He didn't let them get warm.

Trouble is, Mick has been unable to sit back and watch. As eager as ever for a kick and the camaraderie of a club he says he "really loves'', he's kept fronting up at Greaves Reserve. And in Round 14 this year, at age 46, he notched his 500th game for Dandy.

"Yeah, I've always got the itch when the season comes around,'' the affable truck driver told Leader. ”I kind of think, well, if the old body is up to it I might as well keep playing.”