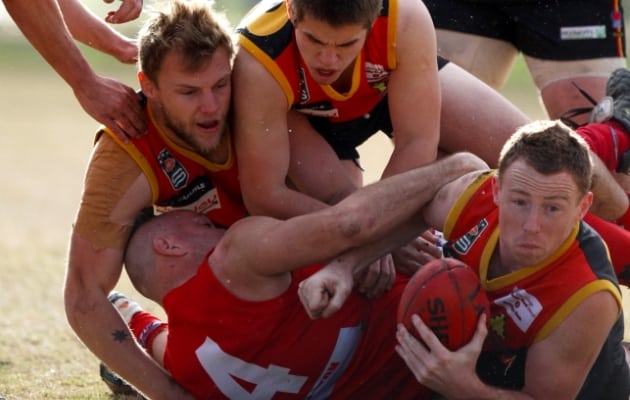 Up until this point, Murrumbeena had managed just six goals for the day. Leading from the front, Murrumbeena coach Matt Jones implored his players to lift. And lift they did! Even a further Springvale Districts goal in the final term couldn’t hold the rampaging Beena, who kicked 6.6 to 1.0 in the final quarter to eliminate the Districts in devastating fashion.

Sometimes we need to fabricate the tension in the room on Presentation Night - not this year. In some terrific finishes, the Division 2 Senior Best and Fairest Award (The Bennett Medal) saw joint winners, with both Gavin Vassallo (Springvale Districts) and Scott Lawry (Bentleigh) polling 3 votes in their final matches.

In the Division 1 vote count, it was an unprecedented three-way tie, with Liam Wilson (St Pauls), Steve Arvanitis (St Kilda City) and Dean Williamson (East Brighton) all walking away with an Ellis Medal around their necks.

After years of service to the local game (as a player, coach and administrator), Steve Barnes left his role on the board and stepped in as the inaugural president of the Carrum Patterson Lakes Football Club. The results speak for themselves – an Under 19s team in the club’s first year, a netball team in the grand final, and a Reserves AND Senior team in the Grand Final also. Whilst a footy club is undoubtedly a sum of its parts, putting Steve at the helm was clearly a good decision by the CPL powerbrokers.

The Doveton Eagles Football Club was in a precarious position just two years ago. Fighting to survive, Paul Davis took charge as coach, whilst mother Jenny Davis took on the presidency and fought tooth and nail to keep the club alive.

Two years on, the club went undefeated and took out the Division 3 flag in one of the best season-performances in memory. Similar to Steve Barnes at Carrum, the Davis’ surrounded themselves with good, hard working people, but they certainly deserve enormous credit for the club’s current position.

11. The launch of Rep Footy

After a long hiatus, the annual Metropolitan Representative Football Carnival returns in 2014!

Following a similar model to the country football carnivals, 2014 will see the major metropolitan leagues pitted against each other in a fight for supremacy. AFL Victoria has confirmed some important details regarding the representative carnival:

The launch of SFL Live saw league followers able to gain access to twitter, facebook, and instagram feeds of all games live, whilst also accessing live scores from every match and radio from the match of the day. SFL Live will serve as a platform for much more content going forward, providing a free, singular portal that people can visit for all their SFL news.

Two old rivals came together in the Elimination Final as Chelsea Heights took on St Kilda City. With the wind becoming a major influence on the game, both teams struggled to take advantage.

After wasting a strong start to the game with 9 behinds in the first quarter, Chelsea Heights was on the back foot all day. That said, the Heighters struggled on and mid-way through the final quarter, skipped ahead to a 12 point lead. But St Kilda City wouldn’t say die, and after kicking two goals to square the game in the final three minutes (including one with 27 seconds to go), the game went into extra time.

Heading into the final 5 minutes of extra time, the Saints held a 12 point lead and with the wind going their way, the win looked assured. Enter Chelsea Heights forward Luke Manders. After the Heighters brought the margin back to 5 points, the club’s leading goal kicker kicked the winning goal with just 11 seconds remaining in the game to lead the Heighters to victory and keep their premiership hopes alive.

It’s still being talked about to this day. When James stood on the head of East Brighton full-back Matt O’Rourke in the Second Semi Final, the crowd was reminded why they paid their admission that day. Many a seasoned football follower said on the day that it was the best mark they had ever seen.

When the SFL called for suggestions on the most memorable moments of the SFL season, even O’Rourke regarded it as a memorable one, submitting ‘Luke James sitting on my head for 3 and a half minutes while he waited for the footy to get to him!’

We’ve already mentioned a lot about CPL in the section covering Steve Barnes, however it needs to be said again: An under 19s team in the club’s first year, a netball team in a grand final, and both Reserves and Seniors in a Grand Final. This would be a remarkable achievement for a club in its 10th year, let alone a club in its first.

Whilst not quite able to go all the way this year, it needs to be acknowledged that to make three consecutive Division 1 Grand Finals (premiers in 2012) is a monumental effort. Under the guidance and leadership of Steve Hill as president, Barry Hope and Ben Murphy as coaches and Ben Douthie as captain, East Brighton Football Club has left an indelible mark on the competition over the past three years.