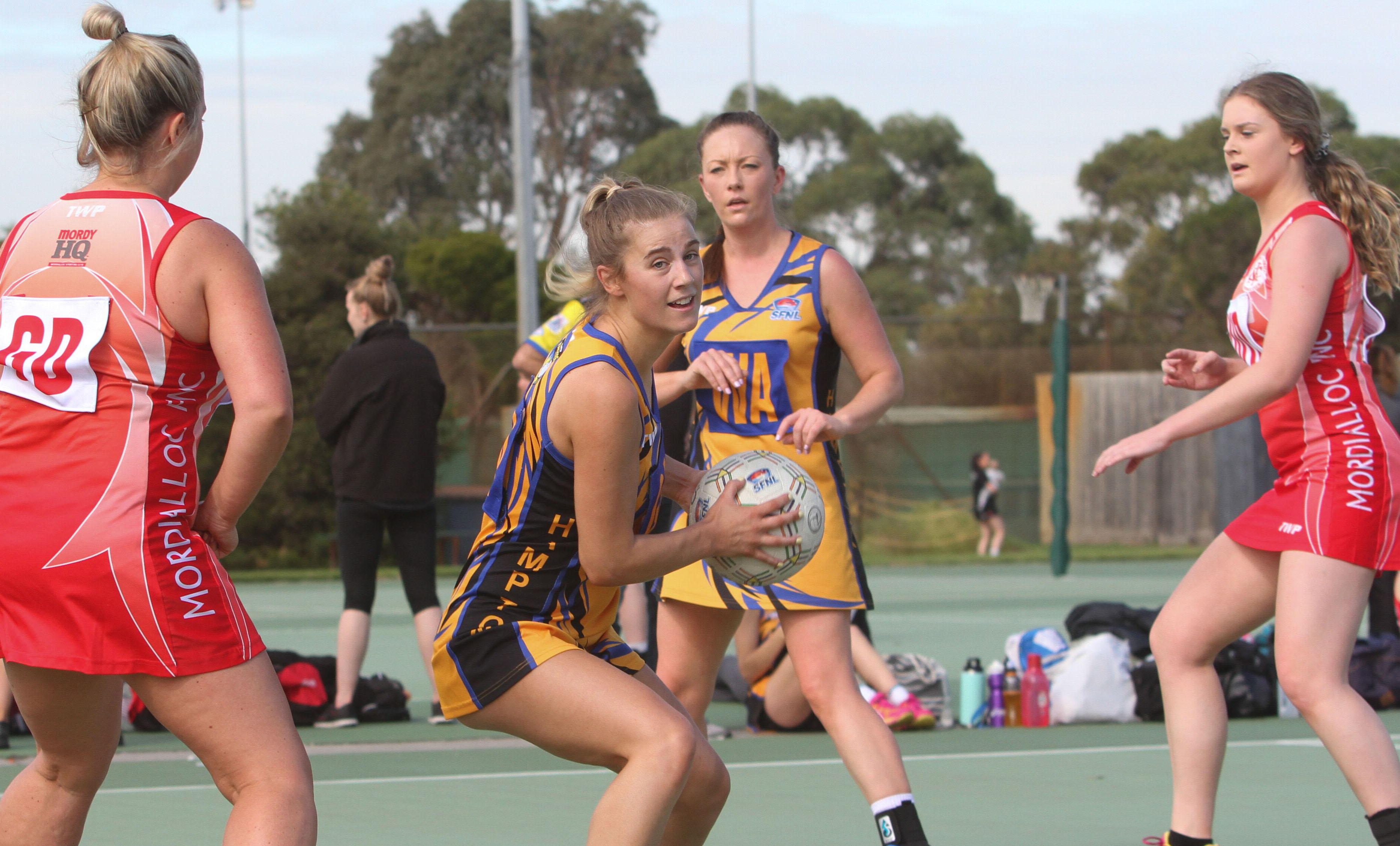 There are still some depleted line-ups in Division 1, which made some of the netball matches a little lopsided. But round two did provide the first upset of the season.

Mordialloc were heavily favoured to defeat Heatherton, but the way this game started wouldn’t have inspired any great level of confidence in either of these sides. After a quarter best forgotten, with many fundamental errors made by both sides, Mordialloc took an 8-5 lead. Mordialloc continued into the second term looking anything but smooth, and with Charlotte Howard and Beth Wilson starting to combine well in the goal circle Heatherton looked dangerous.

Mordialloc’s know-how allowed them to take a 15-10 lead into half-time, but that’s where the fun really started. Beth Wilson missed the ring with the first shot of the quarter, but soon found her range and Heatherton went on a run that brought them the first six goals of the second half. Mordialloc struggled to get their hands on the ball as Heatherton continually blocked their passes, and with the Mordialloc defence at sixes and sevens Heatherton scored thirteen goals in the third quarter, with only two replies.

From 23-17 down at three-quarter time Mordialloc had a mountain to climb, and they finally found a bit of fluency in the last quarter. Heatherton, however, were still prepared to work hard and with the likes of Kali Dolphin and Courtney Osborne unwilling to relinquish control in the centre, Mordialloc struggled to make an impression on the scoreboard. A heavy collision between Caity de Garis and Heatherton’s Beth Wilson, and an ankle injury to shooter Emily Morris late in the quarter halted any momentum that Mordialloc generated, but it probably made little difference as Heatherton were too good on the day.

An under-strength Caulfield have lost their first two matches of the season for the first time since entering division one, having had no answer to a rampant Dingley early in this match. Dingley took a ten goal lead out of the first term and extended that lead to 30-12 at the half, and although Caulfield squared the second half it was too little, too late.

Dingley lost Ella Quinlan to a training injury through the week, but had the ideal replacement in Bianca Waras-Carstensen. She immediately scored thirteen goals in the first term as Dingley’s ball movement and space making were excellent. Caulfield started applying some pressure in the second quarter, with Megan Ellett at the back and Bec Smith in attack working particularly hard, but could make no impression on the scoreboard as the game was done as a contest half way through.

Caulfield showed considerable courage to keep working hard in the second half, and started to give Sophie O’Shea some supply which she was able to convert into goals, but with Lorna Clark and Shae Wonnacott impressive in the mid-court Dingley were never troubled as they cruised to an eighteen goal win.

Cheltenham showed enough in their division one debut to suggest that they belong in this competition. In round two they took it to the next step by claiming their first top division victory against a St Pauls side struggling to get anywhere near their best side on the court.

From the start of this match Cheltenham impressed with their endeavour, speed and combinations. St Pauls attacked well but when Cheltenham won the ball they moved it quickly and with precision, leaving St Pauls chasing their tails. As game as St Pauls were, Cheltenham led 14-8 at quarter time, and while Emma Gardiner and Renee Derimboglou in particular tried to lift the Saints the lead blew out to 30-16 at the main break.

The control that Cheltenham had of the mid-court continued unceasingly after half time with Meg Seidle in the pivot and Emma Nicholson at wing defence particularly impressive. Both Cheltenham attackers were equally dangerous, posing a further problem for the embattled St Pauls defence, and a 47-26 three quarter time lead was extended in the final term to provide a 64-33 final margin. There are happier times ahead for St Pauls, but Cheltenham have posted their notice that they are in this competition intent on making a big impression.

Caulfield backed up their impressive round one form with a 35-31 win over a very competent foe in Oakleigh District. Having conceded a six-goal lead by quarter time, they played a brilliant second term to go to the main break level. Parity was maintained to three quarter time after fifteen minutes of tight netball, but when the game opened up in the last term it was the Bears that were too strong. There was no such problems for Murrumbeena, who overcame a slow start against Mordialloc to post a solid 53-36 victory, with Alice Williams scoring 37 times herself. Cheltenham franked their credentials, making short work of St Pauls by 54-22, while Heatherton had to withstand a big third-quarter comeback before putting paid to St Kilda City’s challenge by 38-35. In the day’s final encounter, Keysborough levelled Dingley’s five-goal first quarter lead by half time, only for Dingley to blitz them in the third quarter and turn for home twelve goals clear. Despite scoring eleven goals in the final term to only five rep
lies, it wasn’t enough for Keysborough to prevent a 35-29 Dingley win.

Frankston Dolphins continued their impressive early season form by taking the lead in the match against Black Rock before half-time, and pulling away in the last quarter to win by 33-27. Murrumbeena led all day against Bentleigh to run out convincing 49-29 winners. South Yarra were way too good for Dingley, extending their lead at every change to win by 52-32. The best match, however, was between Caulfield and Cheltenham. After an even first quarter Cheltenham took the initiative to lead by six at half time, but Caulfield were not done, Jacinta Traeger was moved from goal shooter to goal attack, and was instrumental in wiping four goals off the deficit in the third quarter, while Jordyn Chodziesner netted all Caulfield’s seven last quarter goals as they secured a 29-29 draw with the Rosellas. St Kilda City had the bye this week.

Oakleigh District took their first points of the 2019 division four season by overturning a two-goal half time deficit to defeat Clayton by 41-37. East Brighton outscored Mordialloc by eleven in the third quarter, although the rest of the match was far more even with East Brighton winning by 45-31. Springvale Districts indicated that they will be a force to be reckoned with by convincingly defeating Caulfield by 45-16, whilst Carrum- Patterson Lakes were equally impressive in leading all day before completing a 52-30 win over St Kilda City. Heatherton completed the day’s proceedings by having little trouble with Keysborough, winning by 39-22, with Doveton Eagles having the bye.

Hampton had the match wrapped up by half time against Mordialloc, before coasting to a solid 42-22 victory. South Yarra were just as clinical in their 57-22 defeat of St Kilda City, as were Doveton Eagles in their 57-19 eclipse of Heatherton. Jodie Brown had another very good day for Caulfield, netting 38 times in their 51-33 win over Bentleigh, but the match of the day was undoubtedly between Lyndale and Dingley. Dingley took the early initiative, leading by five at half time, but Lyndale hit back hard to lead by two turning for home. After a rollicking last quarter in which both sides scored freely, it was Lyndale that had their noses in front on the final siren, winning by the barest possible margin of 50-49.

Parkdale Vultures took their first competition points of the season with a sterling defensive display against East Brighton. They established a 10-1 quarter time lead, and held roughly the same margin all day in winning by 22-12. Highett were no match for Doveton Eagles, with the Eagles dominant from the jump in winning by 53-20. Aspendale Arrows continued their strong round one form in winning every quarter, beating Heatherton by 50-26. Springvale Districts took a thirteen-goal lead at half time and were able to withstand a last quarter St Kilda City challenge in winning by 29-20, while Murrumbeena were way too good for Dingley in winning by 46-21. Lyndhurst had the bye this week.

Skye continued their positive return to the SFNL, overturning an early deficit to score a commanding 52-31 win over Hallam. South Yarra travelled to the Peanut Farm to take on St Kilda City, having had the bye in round one, and began their season in style with a crushing 62-25 win. Mordialloc got their points tally underway, establishing a good first half lead and pulling away late to beat Carrum- Patterson Lakes by 42-28. Cheltenham led Springvale Districts by six at half time, and after an even third quarter they doubled that advantage in the final term to win by 43-31, while Doveton Eagles were dominant all day in beating St Pauls by 61-6. Keysborough had the week off in round two.

Hampton beat Doveton Eagles in a high-scoring encounter, dominating the second half to win by 52-35. Frankston Dolphins established a five-goal half time lead over Cheltenham after holding sway in an even second half, winning by 32-26. Dandenong took a winning lead to the last change and were able to hold back Caulfield to win by 32-23, while South Yarra won all four quarters against Dingley in winning by 41-23. Bentleigh extended their lead throughout the first three quarters, and although Lyndale squared the last term Bentleigh ran out 34-27 victors. Lyndhurst had the bye.

Parkdale Vultures took their first points in SFNL competition, as Mordialloc rued their poor second term in being beaten by 38-32. Hampton Park 1 overturned a two-goal three quarter time deficit to beat Murrumbeena by 38-33. Oakleigh District ran riot in the first quarter and then held Dingley well to win by 49-29. Black Rock also trailed at the last change but finished too well for Hampton, winning by 26-23, while Highett’s shooters did a fine job in a convincing 48-17 victory over Hampton Park 2.

Heatherton looked impressive in leading all day, beating Keysborough by 38-24. Oakleigh District also won every quarter against Springvale Districts Blue, winning by 34-19. Doveton Eagles took their first points of the season with a solid 30-20 win over Springvale Districts Red, as did Hampton in winning every quarter in their 40-21 win over Dandenong. Clayton were able to leave the runners in the shoe rack this week.