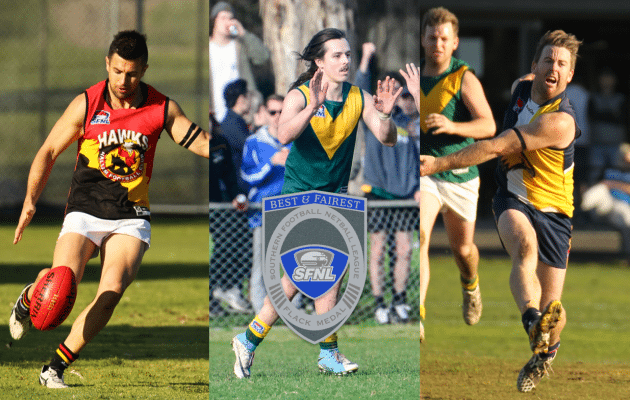 After reflecting on an exhilarating finals series, it is time to look back to the home and away season and award the Flack Medal to the Division 3 best and fairest.

We can anticipate a thrilling vote count with no clear favourite evident. However, this scribe has been asked to nominate those most likely, so here goes.

What better place to start than with last year’s winner and this season’s premiership skipper Corrie Wilson.

Wilson had a scintillating season with his presence felt all over the field, and regularly featured in Doveton’s best.

He played every game, booting 22 home and away goals as well as setting up many others with his drive from the midfield.

Should he receive the Flack Medal it will be his third, after also taking home the honour in 2004.

The skipper won’t need to look far for serious competition, with his teammate Cory Wilson also in the running.

The Wilson with the more traditionally spelled first name is another crucial component in the Eagles’ all-conquering midfield.

Like his captain, Cory played every match and he proved even more damaging around the big sticks with 33 home and away goals.

Cory was also a regular entry on Doveton’s list of best players.

Although Doveton finished top of the mountain after the finals, it was Hallam that led the way in the home and away season.

The Hawks have at least a couple of genuine best and fairest contenders.

A Flack Medal would be a fitting end to the career of running machine Manny Peresso who announced his retirement after Hallam’s preliminary final defeat.

Peresso may be pushing 40 years of age, but it hasn’t curbed his onfield influence. His season was full of class and he only failed to be mentioned in the Hawks’ best players on two occasions in his 17 home and away games.

The co-captain again set the example for his teammates in terms of fitness and dedication to training. He was a major reason why his side topped the ladder after the home and away season.

Peresso was not a prolific goal kicker, with just six during the regular season, but his precise delivery provided abundant opportunities for teammates.

Fellow Hawk, Phil Ward is sure to have caught the attention of the umpires with his ability to take on the game and kick goals. As well as offering plenty in the midfield, Ward booted 30 home and away goals, and proved durable, featuring in every match.

Another player who can’t be overlooked is Endeavour Hills’ Daniel Batson who helped take the Falcons to the grand final.

The polished midfielder played 15 home and away games, being listed as the Falcons’ best contributor in a third of those.

He kicked just 12 home and away goals, but his sure ball handling and efficient delivery to teammates will earn him lots of votes from the umps.

It is tough to go past Hallam’s Peresso for consistency, but will the fact he isn’t a regular goal kicker see him edged out for the Flack Medal?

For those lucky enough to be going to the awards night at Sandown, enjoy the evening, and expect to be perched on the edge of your seats for the Division 3 count.