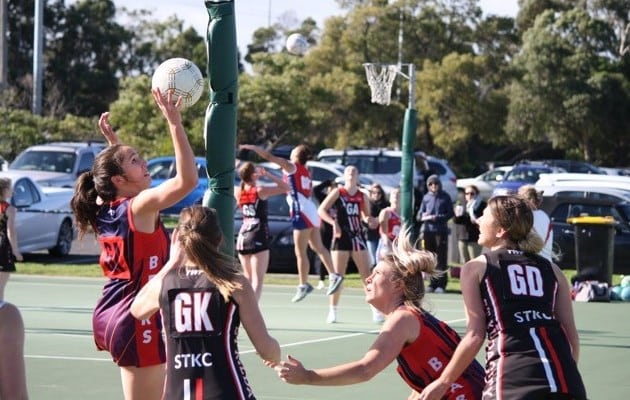 Listen back to the podcast of Sunday’s 'Nothing But Net' radio show, with special guests Dani Forward (Black Rock FNC) and Matt Grimwood (SFNL Netball Officer), in the player below.

The first day of the 2017 season dawned with warmth, a bright sun in the sky, and a howling northerly which made goal shooting a somewhat tricky affair, especially into the gale. Welcome to netball – it’s good to see you back.

The Caulfield v St Kilda City clash started as a rather cagey affair whilst both sides worked hard to get their combinations working again after the long hot summer. There was not a lot of fluency early but the Saints began making inroads up the right hand side of the court as the first quarter wore on. Caulfield gained confidence with every attack they were able to quell, and they were able to extend a three point quarter time lead into a 23-14 half-time advantage. St Kilda needed to strike early after half time to stay in the game but it’s here that the Bears really put their collective foot down, turning for home with a 42-20 lead and keeping their opponents at arm’s length in the final stanza to record a solid 54-30 victory.

Dingley took on a new, young Bentleigh combination that fielded only one player over 22 years of age. The Bentleigh coaching staff emerged from this match happy with the way their young charges went about this match, even if the execution wasn’t always as they would have wished, the feeling being that this would improve as the season wears on. Dingley felt that there was a bit of rustiness in their game early on, and were happy that their combinations became smoother the further the match went. They will be particularly happy with their defensive effort in winning all four quarters and emerging victorious by 53-25.

Heatherton Black began their premiership defence against preliminary finalists Keysborough. Having lost bookends Sam Downie and Abby Mackie, one of the big questions of 2017 was how the Borough side would look, and from the jump it was obvious that there would still be no easy matches against this unit. They made the premiership favourites fight hard for every opportunity that they created while winning plenty of their own ball in the mid-court. It was the Heatherton defence, led by the excellent Kirsten Daley that made the big difference on the day as they made it very difficult for the Keysborough shooters to receive the ball in good position within the goal circle. While Keysborough were gallant to the end and came hard at their opponent all match, it was the black and white that triumphed to the tune of 37-33.

The best match of the first round in Division 1 pitted last years’ second tier grand finalists against each other. Heatherton White was very impressive in this game, moving the ball quickly and sharply while not letting St Pauls settle. In Bella Riddell and Mia McMillan, Heatherton have a shooting division that is a handful for any defence, while at the other end Alex Riddell gave the dangerous Grace Healey not a moment’s peace in a keenly fought 37-31 win. Scott Regnier would have been delighted with the cohesion that he saw in his young side, while St Pauls also saw plenty to be encouraged by in their tenacity after Heatherton White got the early jump.

St Kilda City kicked off their campaign against division two newcomers South Yarra at the Fritz Holzer Reserve courts with an encouraging 34-29 success. The Maggie Riley-coached Yarras came into the match with the confidence of a Division 4 premiership under their belts and were looking to parlay that performance into a positive beginning. They will find plenty to be happy with in this match. Their opponents are also an unknown quantity at this level, and the new-look St Kilda City will be well heartened by the four points here.

Dingley took on Mordialloc to start their Division 2 journey. Matches between these two opponents can sometimes look more like a war than a game of netball, but it was Dingley that wrested the early advantage with the first three goals and they were never headed from there. A 21-12 half-time lead was carried on clinically in the second half, and a 43-21 victory was reflective of the Dingoes dominance on the day.

Caulfield made their Division 2 debut with a side that mixed promising young talent with a fair smattering of Division 1 experience. It took on a Carrum Patterson Lakes side which, whilst being as game as they come, looked a rung below their more battle-hardened opponents. They will be happy with the way they never threw in the towel, and looked to improve as the match wore on. Caulfield however were a little too good and ran out 44-11 victors.

It was a strong Heatherton side that took to the court to meet Bentleigh. This year’s Bentleigh side bears little resemblance to that which took to the court in Division 2 last year – indeed three of the team list comes from last year’s Division 7 side – and to meet a skilled and experienced Heatherton outfit is probably not what they would have wanted to start. It came as little surprise that the girls in black and white were dominant once they got their cohesion up and running, and won comfortably by 58-16.

Division 3 saw some close, competitive netball. Caulfield overcame injury and a tenacious opponent to defeat Black Rock by 21-19. Dingley triumphed in a very physical affair over Heatherton by 34-31, while Clayton was strong at the finish, outlasting Keysborough to win by 28-25. St Kilda City was rather more comfortable in a 39-23 defeat of Mordialloc, while Lyndale outclassed Hampton by 43-12.

Division 4 kicked off at Fritz Holzer with the local South Yarra side being soundly beaten by St Kilda City to the tune of 46-19. Black Rock was too good in trumping Caulfield by 38-24, while Dingley Red had the close one against Keysborough, winning by 32-28. The two Heatherton sides both racked up big wins, with the White scoring 62 goals against East Brighton’s 17, and the Black tallying 61 to beat St Pauls 19.

Lyndhurst hosted Mordialloc in Division 5 at Marriott Waters as part of their ladies day celebrations, and it helped them defeat their visitors by 47-15 on a day where close results were few. Caulfield beat Heatherton 46-33, Skye beat Cheltenham 46-21, Dingley were too good for St Kilda City Black, winning by 48-25, and St Kilda City Red shook off a determined Bentleigh by 29-19. The closest match came between Highett and Dandenong, with Highett prevailing just, by 25-21.

Division 6 welcomed two new clubs to the SFNL netball fold, but could not give Hallam or Aspendale maiden victories as they were vanquished 38-25 by Heatherton, and 46-38 by Dingley Yellow respectively. Doveton were too good for South Yarra, 37-28 being the margin, while Clayton was similarly impressive in dispatching Chelsea Heights 26-11. Dingley Red made short work of Lyndale, winning by 49-22, while Mount Waverley made a successful entrance to division six, convincingly beating Caulfield by 42-15.

St Kilda City opened the Division 7 campaign with the season’s first one point margin, just getting over the top of Heatherton 22-21. Doveton made it a good day for their club with a 31-12 triumph over Murrumbeena, while Carrum Patterson Lakes got on the board with a 42-22 win over Chelsea Heights. A determined young Oakleigh District side were unable to match Dingley, with the Dingoes prevailing by 34-13.

Lyndhurst made it two from two for the Lightning, beating Hallam 27-17 at Marriott Waters. Heatherton were just a little too composed for Mount Waverley, closing out a 20-11 victory. Black Rock shut out Lyndale, winning 21-7, while Keysborough 40 beat Mordialloc 26. Dingley meanwhile completed a clean sweep for the day, scraping home by 27-24 over Dandenong.