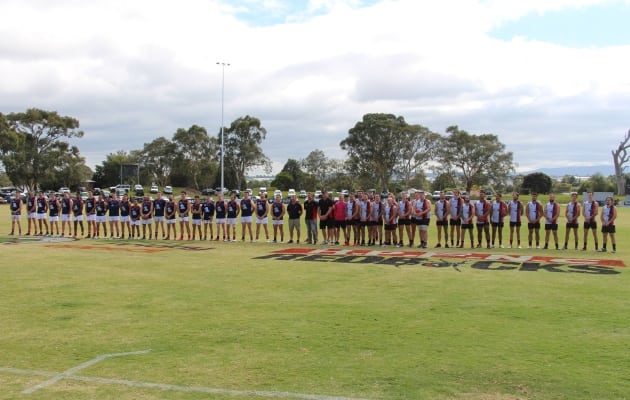 A passionate rendition of Spiderland rang out in the Hampton Park rooms after the Redbacks entered the SFNL competition in ideal fashion.

They recorded a 15-point triumph in a hotly contested match against fellow Division 3 newcomer Springvale Districts.

It wasn’t only the footy that was hot on a glorious sunny day.

The action took place in a finals-like atmosphere, with a large and enthusiastic crowd in attendance.

Hampton Park held a raffle for the Good Friday Appeal and painted the appeal logo on the field.

Off the field, a shiny red Ferrari attracted attention, but fortunately for its owner was not a magnet for the Sherrin.

In contrast, Cory Phillips was.

He was a terrific performer for the victorious Redbacks, earning praise from the SFNL radio team.

His penetrating left foot kicks were a major factor in his side’s win and he finished with a couple of goals to his name.

The commentators agreed Phillips was the player of the day, and this scribe concurs.

Hampton Park coach Jason Chapple offered a surprising piece of information when chatting on air post-game about the best on ground performance.

“Cory Phillips did his ACL on New Year’s Eve and decided not to have the operation, and he was running round without an ACL. It was just an amazing effort,” Chapple said.

Another Redback to catch the eye was Reece Smart who won plenty of the footy and used it efficiently.

For the conquered, but competitive Demons, the tireless and impressive work of Daniel Wilson in the ruck led to him being named his side’s best contributor.

Stefan Feehan was the most prolific goal scorer of the game, with the Springvale Districts’ player booting four majors.

Although not listed in his side’s best, Feehan showed promising signs for the season ahead.

One highlight was his strong contested mark early in the third term, from which he goaled, putting the Demons ahead.

However, after Hampton Park edged in front nine minutes into that quarter, the Redbacks began to take charge.

At one stage they marched to a 33-point lead in the final term, before three late goals added respectability for the Demons.

It seemed fitting the final margin was a small one, given the closeness of the scores throughout an absorbing first half.

A blowout would have been disappointing.

At the major break just a point separated the combatants, with Hampton Park holding the slender advantage.

The Redbacks were hampered by inaccurate kicking, registering 4.7 in the first half. In contrast, the Demons managed an efficient five goals straight in that period.

Players from both sides must have already been feeling the pinch on such a hot day. However, despite a large number of players cramping in the second half, the game continued to be an entertaining spectacle.

“I think it was a pretty good standard game,” Chapple told the radio crew.

“I don’t think these two teams would look out of place even a couple of divisions higher.”

He was delighted for Redbacks’ supporters, who have enjoyed very few wins in their torrid recent years of SEFNL footy.

It is a little disappointing having to wait a couple of weeks for more SFNL Division 3 action, after such an exquisite appetiser.

But, for the players of Hampton Park and Springvale Districts, it is a well-earned rest after an arduous game.

With the Good Friday match originally scheduled for Round 13, Round 1 for all Division 3 teams arrives on 14 April.