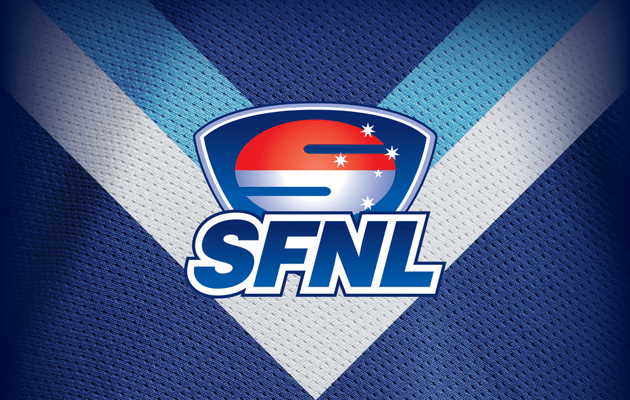 This week on The 5th Quarter, SFNL CEO Mike Palmer joined the boys to discuss the issues surrounding the player points system and what could be done to improve the system.

Mr Palmer did not shy away from some of the potential flaws in the system as he was grilled by Wiz, Bug and Beanie on some of the cracks that have surfaced this season.

One of the first issues discussed was the disadvantage associated with the lower division clubs when trying to attract and recruit players from higher divisions.

“I think there is some problems with the system,” said Mr Palmer.

“Being in the job for three months, there’s some things that don’t make sense to me either. The whole process is more complicated than the rules.

“AFL Victoria have said that the rule book is going to be twice as thick [next season] and it’s probably going to have to be with some of the things coming up.”

When talking about the gap in quality between the tiers, Mr Palmer wasn’t convinced that the lower divisions even needed the points system.

“I get the idea of the points so people can’t develop super clubs, but if you start developing a super club in Division 4 you’ll eventually go up and get clipped around the ears,” he said.

The current setup has been particularly tough on battling Division 4 club Sandown, who have been restricted in their recruiting abilities due to the points system.

“One of the clubs I feel sorry for is Sandown. They had a bit of a rebuild. All of the players they got in had been at two or three different clubs before and that limited the players they could get in,” said Mr Palmer.

“They’re trying to get off the bottom of Division 4. It makes it harder on the lower clubs, [they] get penalised for trying to bring in players.”

One component of the system that is often misunderstood is that the allocation of points doesn’t relate to playing ability, instead points are allocated according to the number of clubs a player has played at.

“It doesn’t relate to ability at all, which is the other problem”.

Another issue that has become apparent in the system relates to how each individual player is allocated their points.

“By the rules the league is meant to confirm the points of all the players before the season. That’s [done] in the last week and there’s 4,000 players. It’s impossible,” said Mr Palmer.

“There’s a reliance on the clubs, the feeling and reality is that a lot of the clubs got some of the players points wrong. We’ve just done a full review and changed over 100 players points”.

But Mr Palmer pointed out that most clubs actually allocated too many points to certain players and therefore were not trying to gain an unfair advantage.

“The majority of the players [points] have gone down, not up. So this is not about cheating,” he explained.

“This is a lot of work for club volunteers, it’s a complicated set of rules and it’s really simple to get them wrong.”

When questioned on the future of the system, Mr Palmer was adamant that the system had full support from the clubs following a meeting with all 36 SFNL members last week.

“Talking to the [club] presidents everyone wants the points system, that bit’s not up for debate. It just needs a bit of manoeuvring and I think it needs to be a bit different between Div 1 and Div 4”.

“I think we made a couple of mistakes, but we are very different to other leagues and the AFL in that we are generous. We want the footy competition to run properly”.


Listen to the full interview with SFNL CEO Mike Palmer on The 5th Quarter in the player at the top of the page.