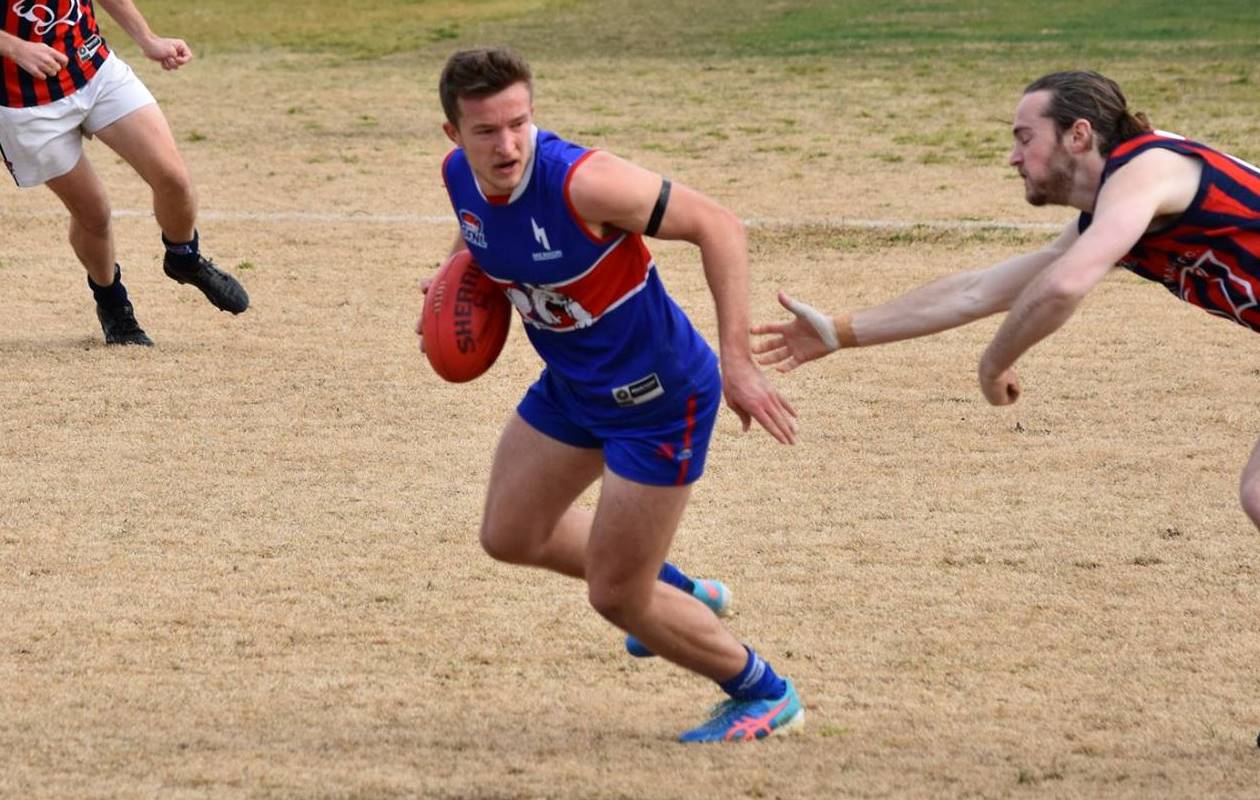 The Doggies have won through to their first Division 1 Senior Grand Final since their 2013 premiership after accounting for the fast-finishing East Malvern by 13 points in Saturday’s Second Semi Final.

Played in perfect conditions at Springvale Reserve, the minor premiers led at every change in a performance that will exorcise their mental demons following last season’s underwhelming straight-sets finals exit and give it a real crack at the 2018 title.

Refreshed and raring to go after their week off, St Pauls started like a house on fire with spearhead Steve Muller putting them on the board within the first couple of minutes.

The Dogs quickly assumed control around the contest, and by quarter time, they had posted four majors and enjoyed a 14-point advantage for their efforts.

Their sizzling start continued in the second term, where they doubled their lead to 28 points. By that stage, East Malvern were held to just two goals, and in desperate need of a spark.

When Brad Dolan slotted his second goal of the premiership quarter at the 15-minute mark, it was almost party time for the Dogs, with their lead out to a match-high 33 points.

But the Panthers refused to concede defeat and mounted one final assault, booting five of the last six goals of the game to send a scare through the St Pauls camp.

The Dogs found themselves light on for rotations in the final term, with a head knock to star midfielder Curtis Murfett prematurely ending his day, however, they dug deep to hold out the fast-finishing Panthers in a cracking contest.

Murfett and Brad Gilder were simply sublime for the winners, with their efforts through the midfield greatly influencing the result.

Tim Walsh and Nick Halliday both worked hard in the ruck against East Malvern superstar Chris Carey, Matt Herbstreit again won plenty of the footy and Steve Muller did the bulk of the damage up forward, finishing with four goals.

The victors have now earned another vital week’s rest ahead of the Grand Final on September 22, while East Malvern will take on Mordialloc for the second time in three weeks for the remaining spot in the premiership decider.

After four consecutive Grand Final appearances and a hat trick of premierships, Dingley’s reign has finally come to an end, with a hungry Mordialloc dishing out an unceremonious 53-point thrashing in the cut-throat Semi Final on Sunday.

The Bloods’ emphatic victory ends a worrying form slump that had yielded just one victory over wooden spooner Chelsea Heights from its previous six starts, and now sets up a tantalising Preliminary Final clash with East Malvern.

Up against a Dingley side that had won its last eight matches, Mordialloc was keen to send an early message that it was not going to be bullied into submission. It did just that, as the Bloods, aided by the inclusions of Jordan Derbyshire and Sean Van Velsen, signalled from the opening bounce that they had come to play with ferocious intent.

They were first to the footy and dominated possession, with a 14-point quarter time lead to show for it, however, they probably deserved a better return than the 2.3 it registered, given how much possession they had in their forward half of the ground.

Dingley fought back in the second term and opened its account with two majors, but it couldn’t make any inroads into the deficit as Mordi withstood their challenge.

The stage was set for a famed Dingley fight back in the second half, but instead it was Mordi that resumed control, slamming on six unanswered goals to effectively kill the contest by the final change.

The Dingoes were hamstrung by an uncharacteristic lack of intensity and accountability throughout the game as Mordialloc made them look tired and lethargic, like a side that had spent all their petrol tickets getting to this point in the season.

However, the Dingoes refuse to roll over, and finishing the game with three last-quarter goals to restore some pride on an otherwise disappointing day.

The classy Aaron Kneebone was simply tremendous in a best afield performance for the winners, with skipper Todd Bastion and winger Lachie Bull also influential with ball in hand.

Luke Barnhoorn went unchecked for much of the day and racked up a stack of possessions, Ben Humphrey and Michael Spohn stood up when needed, and James Morris returned to form with four majors, but there were quality contributions across the board for the Bloods.

For the Dingoes, Kristen Feehan was ahead excellent floating loose in defence, Chris Horton-Milne, Trav La Rocca and Josh Ferguson all looked good and Daniel Farmer was their only real avenue to goal, booting three of the side’s five majors.